Find out how Irish Aid is making a difference in the lives of people and communities in the developing world.

Getting parents involved in Ethiopia 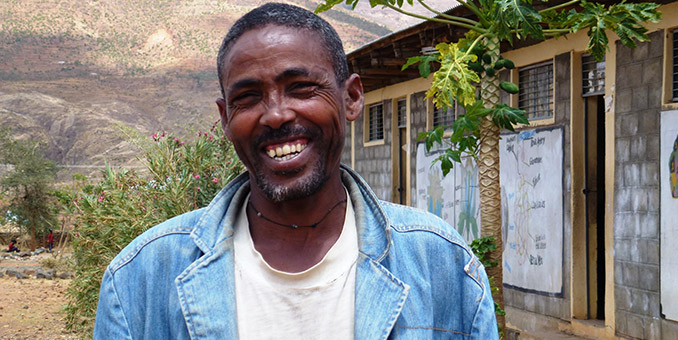 Ethiopian farmer Kiros Tesfaye, stands in front of his son’s school. Thanks to a community initiative supported by Irish Aid, his son’s school now has a new classroom, additional textbooks and running water.

Ethiopian farmer Kiros Tesfaye wanted a better education for his son. Since he got involved in a community initiative, his son’s school has got a new classroom, additional textbooks and running water. And now Kiros knows he can make a difference in his own community.

Kiros lives in Bizet, in Ethiopia’s rocky highlands where he works his small farm to produce enough for himself and his family. His son attends the local primary school because, for Kiros, education is the key to a better future.

Before he came together with others in his community, the local primary school had many problems. There was no running water, pupils did not have enough textbooks and the school was very overcrowded. Kiros, like other concerned parents, did not have a way to raise these problems with the local authorities and did not feel able to deal with them alone.

The first step in tackling the school’s problems was to bring the parents, teachers and Government representatives of the area together. This was achieved with support from a local church group but getting agreement on what needed to be done was not easy.

“It was a heated discussion”, said school principal Mezgebe GMariam. Officials, teachers and parents were initially at odds over what the school’s problems were. But a visit to the school helped the group see the problems for itself and agree on which were most urgent.

“The process helped us to come together and to respond to the problems.  This is not the Government’s school, it is our school.”

Finding the money for the improvements was another big challenge. The group solved this through a joint effort; the community contributed the funds and labour for the new classroom, the education authority provided additional textbooks, and the local council installed piped water.

The community is proud of its achievement and feels a new sense of ownership about the school. Kiros summed up the change. “The process helped us to come together and to respond to the problems. This is not the Government’s school; it is our school.”

With support from Irish Aid and the assistance of local groups, communities like Bizet are now better able to talk to their local authorities about the services they need and to propose improvements.

Involving communities helps change the way that local government takes their needs, including the sometimes different needs of men and women, into account and also helps improve the quality of services.

Alongside this, Irish Aid supports a national programme led by the Government of Ethiopia aimed at improving the availability and quality of basic services. The additional resources provided through the programme have resulted in improvements in access to water, maternal health facilities, additional classrooms and separate toilet facilities for girls in schools for hundreds of communities throughout Ethiopia.

Something we can be proud of

14% The amount of people in Ethiopia who live below the poverty line has decreased by 14% since 1999.

Find out how Irish Aid is making a difference in the lives of people and communities in the developing world.