Read more about the Hunger Nutrition and Climate Justice Conference.

Responding to Hunger and Climate Change in Ethiopia

‘The life for women like me has greatly improved.’

Shefena Kahsay’s house, made from the same rocks as the craggy hill it is perched on, blends seamlessly into the landscape. It looks picturesque, but in this part of Tigray in Northern Ethiopia the soil is sandy and thin, the hills steep and the climate harsh making it difficult to grow anything.

Despite being widowed and having to support her two sons, Shefena’s story is one of change. Looking out at her farm, she said ‘After my husband died I sold all my cattle and leased my land to others but now I am leasing from others and have all my cattle back.’

Shefena’s farm has been changed immensely by Irish Aid supported projects. One of these initiatives focused on building small dams and creating terraces; all of these slow down the flow of water and allow it to collect underground leaving more moisture in the soil. The rise in the water table allowed Shefena to dig a well on her land and now she can irrigate and grow vegetables which she sells for profit during the dry season. 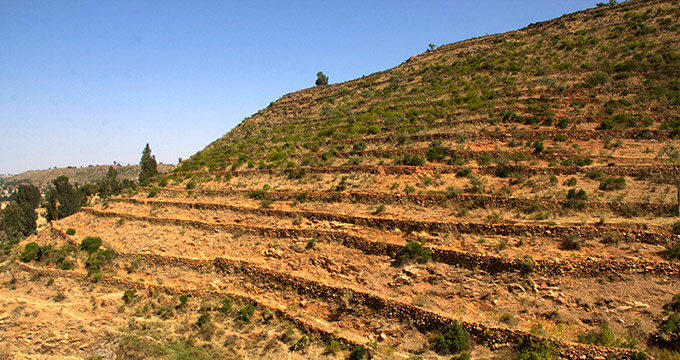 To complement this, another Irish Aid supported project has sought to improve the productivity of the crops which farmers grow. New varieties, adapted to local conditions, are developed by research centres and tested locally with the help of farmers who select the most productive and hardy crops. These crops produce higher yields, are more resistant to disease and better able to cope with the effects of climate change. Shefena recalled how the project coordinator especially encouraged female farmers. ‘He was a special person’ she said ‘who motivated female headed households.’ Talking about the wheat she now grows, Shefena said ‘The old wheat used to whither in the heat, the new wheat grows in just three months and produces a bumper crop.’ She is now able to feed her family all year round from this crop alone.

These two projects are a great example of how an integrated approach provides a holistic response to climate change, poverty and hunger, having a real impact on the lives of people like Shefena. She summed it up by saying ‘The life for women like me has greatly improved.’

The effects of climate change and its impact on hunger and nutrition will be discussed during an international Conference on Hunger, Nutrition, Climate Justice taking place in Dublin in April.

Read more about the Hunger Nutrition and Climate Justice Conference.