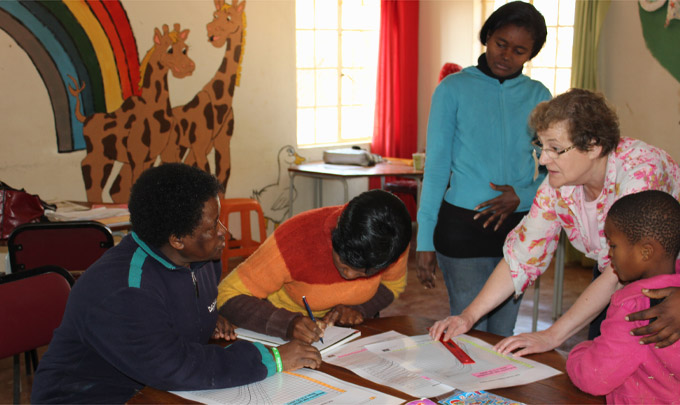 Volunteering plays an important role in the Serve Development Programme (SDP) which is supported by Irish Aid's Programme Fund. Each year Serve places approximately 100 volunteers on overseas group placements - around 40 of these volunteers are placed with SDP partners in South Africa and Mozambique.

Noreen Oliver, from Galway, volunteered with Serve in South Africa in 2014. After a nursing career which spanned 38 years, Noreen says she volunteered because "I felt I wanted to be constructive with my retirement ... I had spent ten years working in a developing country and felt I would like to do more work in that area".

Noreen worked with two of Serve's partners, Tapologo and Tsholofelo, in the area of Rustenburg which is the centre of South Africa's mining industry. Despite great mineral wealth, thousands of economic migrants are living in informal communities. HIV and AIDS is the biggest threat to people's health. Noreen worked at crèches run by Tsholofelo - the only places offering early child care in the camps. At Tapologo, Noreen used her experience to help nurses and child care workers gather data to monitor the impact of Tapologo's Orphaned and Vulnerable Children's Programme which cares for 650 children each month.

The human rights challenges faced by migrants emerged as one of the main lessons for Noreen who became "more aware of the hardship on women and children. I see the need for pressure groups to fight for citizenship and equal rights for all migrants. I feel very strongly for the need to work with children of migrants because when their parents passport are not renewed the children become non entities leading to no education or job prospects".

If you are interested in volunteering overseas with Serve visit their website  More information about the SDP here.