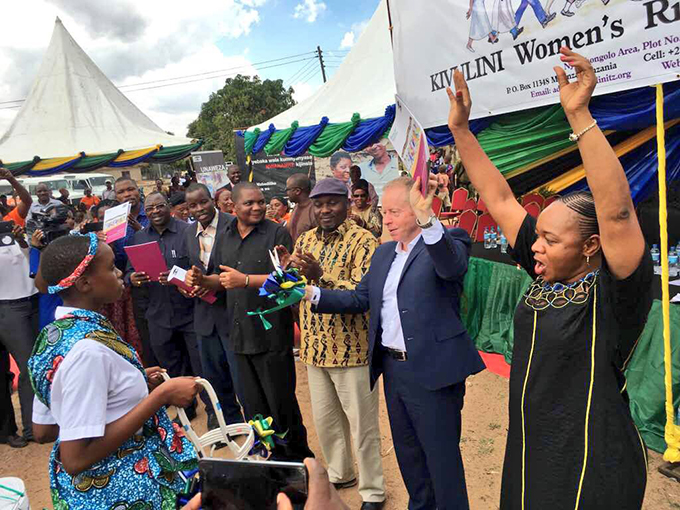 Minister of State Cannon at Launch of Kivulini Programme on the 17th of October 2017. Photo: Irish Aid

The cases supported by the CAs are varied and can involve helping individuals and families to access police, courts and legal recourse. The work involves supporting individuals, especially women who are in violent relationships, to take measures to ensure their safety and deal with the power imbalances that may exist in their relationships. It also involves engaging with communities to change attitudes around the acceptability of violence against women and girls.

Lucia Valery and Agnes Mpanduji are the two CAs among twenty CAs from Idetemya ward who have been helping many women and girls who are experiencing VAW to access their justice. In Bukumbi village these two CAs helped Elizabeth John a married woman to reconcile her marriage and live free of violence.

Elizabeth was living in a violent household, with violence being carried out by her husband, sisters in law and mother in-law. After attending a community meeting facilitated by community activists she learned that men’s misuse of power over women is unacceptable and that everyone has the right to live free from violence in their relationships. Elizabeth was inspired to move out of that relationship and start a small business selling local brews. With the money that she made she was able to purchase a land and build her own house.

While living away from her husband, and with the assistance of the community activists, Elizabeth was able to begin to have conversations with her husband and they negotiated for him to join her on the condition of non-violent behaviors. They are now living in a non-violent relationship, with their children.

Gender equality and women’s empowerment is at the core of Ireland’s International Development Programme, One World, One Future. We believe that gender equality is a prerequisite to development and we are committed to developing and supporting gender-responsive programming and policy.

The Sustainable Development Goals, agreed by the Global community in 2015, include one   specifically on achieving gender equality and empowering all women and girls. Goal number 5, contains targets on ending all forms of violence and harmful practices against women and girls.

One in three women worldwide experience physical and/or sexual violence. This can have a serious impact on the health and well-being of survivors with long-lasting physical and psychological effects. Fear of GBV can often inhibit women’s participation in decision-making and leadership. The prevalence of GBV is also particularly high at times of humanitarian emergencies, especially in times of conflict, when normal systems of protection are often undermined.

As a result, Irish Aid has prioritised policy development, funding and research to address GBV.