Read more about the UN International Strategy for Disaster Reduction.

In each of our partner countries we support communities and governments to take action to tackle the effects of climate change and environmental degradation.‌ 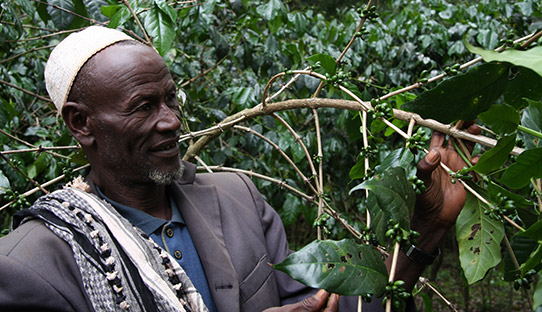 Climate change is impacting differently on communities in each of our partner countries. The following  examples show how we support communities and governments to take action according to the needs of the local context :

Mozambique is one of most vulnerable countries in the world to the effects of natural disasters and climate change. In the last 10 years, Mozambique has experienced a noticeable increase in severe weather conditions.

As a result of climate change, the country’s exposure to natural disasters will continue to increase over the next 20 years, and the effects are likely to include rising sea-levels, droughts, cyclones and floods.

We provide support to the Government of Mozambique’s Agriculture Support Programme for initiatives to adapt to the changing environmental conditions brought about by climate change.

We also work in the province of Inhambane in southern Mozambique, which is prone to cyclical floods and drought that are becoming more frequent and intense. A high percentage of the population is dependent on subsistence agriculture and natural resource extraction. We work to help people adapt to these conditions by supporting:

Our programme in Malawi has a very strong climate change focus. We aim to ensure that households and smallholder farmers benefit from improved crop productivity and diversification of crops so that vulnerable communities can adapt to the changing conditions caused by climate change. Examples of our work include:

We are also supporting households in disaster-prone areas in Malawi so that they are better equipped to respond to sudden or long-term environmental disasters linked to climate change.

We support disaster risk reduction plans in certain districts and we are strengthening the ability of the Government to identify risks with the aim of reducing the impact of disasters on the poorest communities.

We also support the development of fuel-efficient clean cook stoves in Malawi.

In the northeast of Uganda, we provide support to the large pastoralist population there who have become increasingly threatened by climate change and other environmental issues.

In response to this issue, we support Oxfam International in the implementation of the Karamoja Livelihoods Support Programme.

Also in Northern Uganda, we address climate change challenges through our Peace and Recovery and Development Plan. Through this plan we support a local aid agency, which is actively involved in advocating for stronger responses to climate change and other environmental issues.

Lesotho is extremely vulnerable to the impact of climate change. We support a number of programmes in Lesotho, which aim to counter its impact.

We work to improve rural water supply and sanitation facilities in remote areas, increasing the ability of poor communities to cope with the effects of climate change. We support the installation of solar energy systems to improve electricity access and reduce the running costs in health clinics.

We also support the construction of keyhole gardens, which help communities to grow vegetables in areas where good soil is scarce. The introduction of keyhole gardens has dramatically increased the growing season for vegetables, providing poorer communities with a continuous and nutritious food supply in the face of declining environmental conditions.

Recognising the growing impact of climate change in Tanzania, we support the Government’s effort to promote conservation agriculture, drought-resistant crops, and improve irrigation across the country.

We have initiated, and continue to support, a fund for aid organisations who advocate on behalf of farmers involved in the raising and herding of livestock. This fund has been used to raise concerns of pastoralist farmers who are affected by climate change.

In Zambia, we support four rural districts in Northern Province in developing and implementing plans which, amongst other issues, focus on improving access to safe drinking water and improving sanitation.

In addition, four water schemes will be completed, increasing access for 32,600 people to improved water facilities.

We also support social cash transfers and other safety net programmes, which have been identified as a key way to increase poor people’s resilience to climate change.

We have supported environmental action in the region of Tigray in Ethiopia, which has helped to protect 7.5 million people from hunger.

This work has supported the building of thousands of terraces and small dams, which conserve water and soil and improve the productivity of the land, ensuring that farmers’ yields are improved. The project was awarded an Equator Prize at the Rio +20 Conference on Sustainable Development in June 2012.

Vietnam is the fifth most susceptible country to climate change in the world. Climate change vulnerability and disaster risk management are high on its policy agenda.

We support community-based disaster risk reduction initiatives such as our support to the United Nations in their co-ordination of policy with many affected parts of society and the Government.

In Pu Luong Nature Reserve, we support community tourism and sustainable management of natural resources. The grant includes the provision of training on environment and climate change issues for local authorities and communities as well as a fuel-efficient stoves pilot project.

In the capital city, we support the ‘Neighbourhood Empowerment in Hanoi’ project, which works with urban residents in low-income parts of the city.

Its aim is to improve their living conditions and the condition of the neighbourhood. These actions include saving energy, saving water, reducing waste, becoming conscious consumers and creating safe homes.

In recent years, the Government of South Africa has stepped up its response to climate change. The issue featured heavily on the political agenda in late 2011 when South Africa hosted the 17th Session of the Conference of Parties (COP 17) to the UN Framework Convention on Climate Change (UNFCCC) in Durban.

Through the EU Global Climate Change Alliance, we are contributing to the United Nations Collaborative Programme on Reducing Emissions from Deforestation and Forest Degradation in Developing Countries (UN-REDD) in Sierra Leone.

Read more about our partner countries

Get more information about the work we do with our partner countries.

Read more about the UN International Strategy for Disaster Reduction.