Female Genital Mutilation/Cutting (FGM/C) is recognised as a severe human rights violation and the Sustainable Development Goals, agreed by world leaders in September 2015, includes a global commitment to end FGM/C. Goal 5.3 calls for the elimination of “all harmful practices, such as child, early and forced marriage and female genital mutilation”. 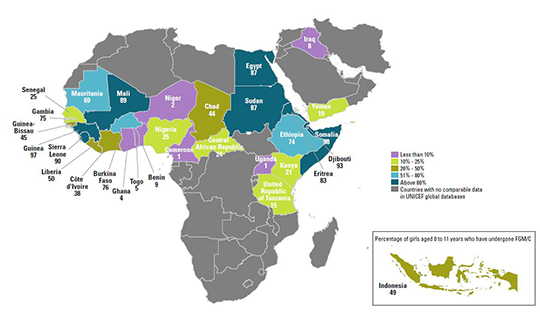 UNICEF global databases, 2016, based on DHS, MICS and other nationally representative surveys, 2004-2015. For more information on UNICEF's statistics on FGM/C, please see: data.unicef.org/topic/child-protection/female-genital-mutilation-and-cutting/

FGM/C is a clear violation of the human rights of women and girls and also infringes on children’s rights to special protection.  It is nearly always carried out on minors and is a violation of the rights of children. The practice also violates a person's rights to health, security and physical integrity, the right to be free from torture and cruel, inhuman or degrading treatment, and the right to life when the procedure results in death.

The World Health Organisation defines FGM/C as a “partial or total removal of the external female genitalia or other injury to the female genital organs for non-medical reasons”.

Procedures can cause severe bleeding and problems urinating, and later cysts, infections, infertility as well as complications in childbirth and increased risk of new-born deaths.  Since in many areas where FGM is performed, access to health facilities is limited or absent, many of the women and girls suffer in silence.

According to recent UNICEF statistics, 200 million girls and women alive today in 30 countries are affected by FGM/C.  In Somalia, 98% of girls and women are affected by FGM/C, followed closely by 97% in Guinea, 93% in Djibouti and 90% in Sierra Leone. Worldwide, approximately 3.6 million girls are at risk of being subjected to FGM/C each year. UNICEF noted that while it is clear that there has been an overall decline in the prevalence of FGM/C in the last three decades, not all countries have made progress and the pace of decline has been uneven. Furthermore there are concerns that the current progress on FGM/C is insufficient to keep up with increasing population growth. If trends continue, the number of girls and women undergoing FGM/C will rise significantly over the next 15 years.

FGM/C is mostly carried out by traditional circumcisers, who often play other central roles in communities, such as attending childbirths. However, more than 18% of all FGM/C is performed by health care providers, and the trend towards medicalisation is increasing. The practice is most common in the western, eastern, and north-eastern regions of Africa, in some countries in Asia and the Middle East, and among migrants from these areas. Research shows that, if practicing communities themselves decide to abandon FGM/C, the practice can be eliminated very rapidly.

Reasons for practicing FGM/C vary across culture and countries, however there a common underlying factor, that FGM/C is an expression of gender inequalities and the power imbalances between men and women. FGM/C is now internationally recognised as a violation of human rights and policies and legislation to prohibit the practice have been put in place in many countries, but FGM/C is such an embedded practice in some societies that in order for change to come about, there also has to be a critical mass of support for its abandonment.

The practice of FGM/C was officially made illegal in Ireland in 2012 and in May 2014 the first specialist clinic was opened for women who have been affected by FGM/C, estimated to be approximately 4000 women in Ireland.

Ireland take a multidimensional approach to tackling FGM/C. Irish Aid addresses FGM/C in its overseas development programme, tackling root causes including poverty, gender inequality, and gender based violence, and working to reduce the impact of FGM/C on the wellbeing of women and girls through increasing access to essential services, social supports, and opportunities for educational and economic advancement.

Irish Aid is supporting a number of UN partners to address FGM/C including UNICEF and UNFPA through their Joint Programme on the Abandonment of FGM/C. This Joint Programme is working at local, national and international levels to combat gender inequality, to mobilise action by young people, families, communities, and civil society groups to end FGM/C, and to generate and use data to break the silence, track progress and inform action, also towards changing public attitudes.

Irish Aid has supported the Joint Programme on the Abandonment of FGM/C since its inception in 2007/2008. Since that time Ireland has provided more than €1.1 million in funding to the joint programme. The Programme now works in 17 countries (Burkina Faso, Djibouti, Uganda, Egypt, Ethiopia, Eritrea, Gambia, Guinea, Guinea Bissau, Kenya, Mali, Mauritania, Nigeria, Senegal, Sudan, Somalia and Yemen) and the programme takes a three pronged approach – supporting the drafting and adoption of legislation outlawing FGM/C; funding community and media education initiatives on FGM/C; and training and equipping health care providers on the management of complications from FGM/C.

In Sierra Leone Irish Aid has been working to try and develop a national strategy on FGM/C. Irish Aid is also providing funds to provide media training for civil society activists on how to report on FGM/C.

Irish Aid is providing funding to CSO’s in Ethiopia to work on raising awareness about the issues relating to FGM/C at a community and governmental level. This work includes trying to bring about attitudinal changes and promoting prevention strategies.

Irish Aid also provides funding through our missions and HQ to CSOs working on FGM/C. In Kenya we are supporting the construction of a centre working on the elimination of FGM/C. The Centre will be a national training centre, conduct research and produce FGM/C campaigning tools and resources.

Ireland is playing an active role in policy development, funding and research to address this appalling practice. Ending FGM/C is one element in our comprehensive approach to promoting gender equality and ending violence against women.