The labour burden of rural women is greater than that of men and includes a higher proportion of unpaid household responsibilities related to preparing food and collecting fuel and water.

Although gender inequality is a global issue, it is made worse by poverty and is a key factor in the persistence of poverty. When women and men do not have equal access to resources or equal opportunities to take part in decision-making, there are direct economic and social costs. These largely affect women but also have consequences for their children, communities and countries. 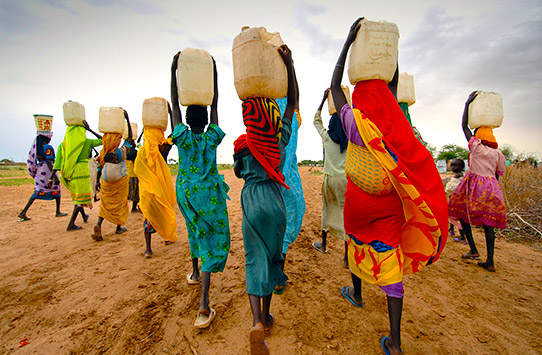 Inequality can impact on every aspect of life. For example, despite being responsible for between 60% and 80% of food production, women have limited access to key agricultural resources such as land, credit and new technologies. Increasing, women’s ownership of land or access to credit or fertiliser can result in significant gains in food production and reduce levels of hunger.

The importance of education

We know that education and poverty reduction go hand in hand. While significant progress has been made on increasing the overall number of girls and boys attending primary school, girls are still not starting or finishing primary school at the same rate as boys. In sub-Saharan Africa in particular, far fewer girls than boys go on to secondary school. Poverty and living in a rural area remain significant obstacles to girls getting an education, with lasting consequences for them, their families and society.

Similarly, a lack of access to basic healthcare and reproductive health services impacts severely on women and girls. Maternal mortality rates in the developing world, which give an insight into the overall level of healthcare available to women, remain unacceptably high.  More than 350,000 women die each year in childbirth or from complications relating to childbirth and 99% of these deaths happen in the developing world. The vast majority of these deaths are avoidable and show why it is important to consider the different needs of men and women when working on issues such as health care.

Progress has been made but men still outnumber women in paid employment, business and political life. Women work two-thirds of the world’s working hours and earn only 10% of the world’s income. On a global level, only 20% of parliamentarians and 16% of ministers are female, although these figures are slowly rising.

Gender-based violence (GBV) is one of the most socially tolerated abuses of human rights worldwide. It is the act or threat of harm inflicted on a person because of their gender. GBV contributes hugely to poverty and ill-health worldwide and prevents many people, the vast majority of whom are women, from reaching their potential.

Irish Aid publish annual monitoring reports on gender equality. To download these reports please click on the links below:

The labour burden of rural women is greater than that of men and includes a higher proportion of unpaid household responsibilities related to preparing food and collecting fuel and water.