One in eight people in the world suffer from chronic hunger.

Worldwide, one in eight people (about 795 million) suffer from hunger. A further two billion people (or one third of the world's population) suffer from under-nutrition. The fight against global hunger and under-nutrition is a key component of Ireland’s foreign policy and our international aid programme. While we provide emergency assistance in response to hunger and nutrition crises, our main focus is on the prevention of such crises. 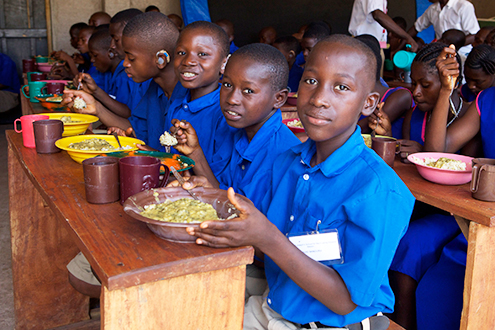 Combating hunger and under-nutrition is an over-arching priority of Irish Aid. Our work on Hunger is guided by the recommendations in the 2008 Report of the Hunger Task Force, a group of international experts convened  by the Irish Government. This approach was reinforced in 2013 by the strong focus on reduced hunger and increased resilience in the Government’s One World, One Future policy on international development.

We also provide emergency assistance in response to hunger and nutrition crises; however, our main focus is on taking actions to prevent such crises arising.

Most people associate hunger in developing countries with the media images of extreme starvation and famine often seen in the aftermath of disaster or conflict.

Far less attention is given to the devastating effects of long-term chronic hunger afflicting 842 million of the world’s poorest people, most of whom live in sub-Saharan Africa and parts of Asia.

The world produces enough food to feed everyone. Yet about one in eight of the Earth’s people do not get enough food to live a healthy life. Poor people are most at risk of acute hunger. It can impact on all areas of their lives, trapping them in a poverty spiral, where they do not have enough energy to be healthy and to work and provide.

People who do not have food in sufficient quantity and nutritional quality are also less resistant to diseases like malaria and tuberculosis and AIDS, making treatment less effective. In the case of children, hunger can affect their learning ability at school.

The threat of hunger is also amplified by the fact that on a wider scale, environmental damage and climate change effects continue to degrade land used by poor people who are already at risk, destroying their crops and undermining their ability to fend for themselves.

The fight against hunger is central to all of Irish Aid’s work. Ireland’s own experience of hunger during the Great Famine in the 1840s still resonates today with Irish people.

We recognise that the right to food and adequate nutrition is one of the most fundamental of all human rights.  We direct more than 20% of the Irish Aid budget to hunger-related activities.  Food security is crucial to achieving all the Millennium Development Goals (MDGs). The first goal, MDG 1, aims at halving, by 2015, the proportion of people who suffer from hunger (based on the 1990 figure, at which time about 23% of the world’s population went hungry).‌

Our priority areas in hunger

Irish Aid is contributing to the achievement of this goal by focusing on three priority areas in ways which are climate-smart, nutrition-sensitive and gender-sensitive:

In our key partner countries Ethiopia, Malawi, Mozambique, Tanzania, Zambia and Sierra Leone we have a strong direct focus on hunger. Our other partner countries also incorporate programmes whose outcomes are aimed to have indirect effects against hunger (for example, education and health programmes will ideally ultimately improve the earning potential of the recipient).

We work at national, EU and wider international level to provide leadership and to help galvanise will to tackle these scourges.We are a strong supporter of the ‘Scaling Up Nutrition’ (SUN) Movement and the 1000 Days Partnership, and work closely with our local and international partners, as well as other Irish Government Departments and agencies, in our efforts to improve food and nutrition security. We used our EU Presidency in 2013 to keep Food Security and Nutrition at the top of the development agenda.

We also support research on better agriculture for development, and on nutrition, aimed at improving knowledge and understanding of how we can respond more effectively to the challenges of hunger and under-nutrition by the application of science and an appreciation of social practice.

Want to find out more?

One in eight people in the world suffer from chronic hunger.