Ireland has become a global leader in the fight against hunger.

Leadership and Governance on Hunger & Under-nutrition

Ireland is playing a key role in influencing the international community to focus on defeating the scourge of hunger and under-nutrition, and to meet commitments made towards this objective. 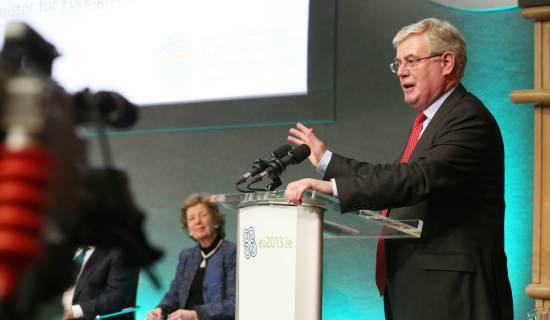 ‌Getting hunger on the international agenda

In recent years, Ireland has been to the fore in calling for greater international action to progress the fight against hunger and under-nutrition. Although a small country in size, we have been successful in using our voice to keep action against at the top of the development agenda.

We believe that with concerted international effort the world can still reach the hunger target of the Millennium Development Goal One. This target was agreed by the United Nations in 2000, and aims at halving, by 2015, the proportion of people who suffer from hunger.

Though a small country, we have been successful in using our voice in national and international arena to advocate for action on hunger and under-nutrition.

Since the publication of the Irish government-commissioned Hunger Task Force report in 2008,   the fight against hunger has been confirmed as a cornerstone of our international development policy and aid programme. This centrality was reinforced in the goals set out in the ‘One World, One Future’ policy issued in May 2013. Within Irish Aid, 20% of our budget is dedicated to actions in the fight against hunger. In addition to our financial support, we are using our experience to influence others to take their commitment to tackling hunger seriously.

Advocating for more and better aid to tackle world hunger

Strong advocacy actions by Ireland, along with high profile interventions in important global hunger-related initiatives have ensured that we are now regarded as a strong leader in the global hunger, and food and nutrition security (FNS) areas.  Through our membership of a number of international committees such as the Committee on World Food Security, and through our bilateral policy engagement with our partner agencies in the UN development system and elsewhere, we advocate for more, and better, aid to improve global food and nutrition security.

Putting hunger on the EU agenda

We work at European Union level to ensure that combating food and nutrition insecurity is prioritised in EU external aid and in EU positions at international meetings.

Tackling global hunger and under-nutrition was a central focus of Ireland’s EU Presidency in the first half of 2013. Under our Presidency a new EU Nutrition Policy to enhance maternal and infant nutrition in EU external assistance was endorsed by the Council of the EU. Moreover, through the adoption of a new EU Food and Nutrition Security Implementation Plan, we also sought to strengthen action by the EU and its Member States in tackling global hunger, food insecurity and under-nutrition. We want to ensure that we in the EU deliver on, and are held accountable for, agreed EU policy priority commitments in this area. 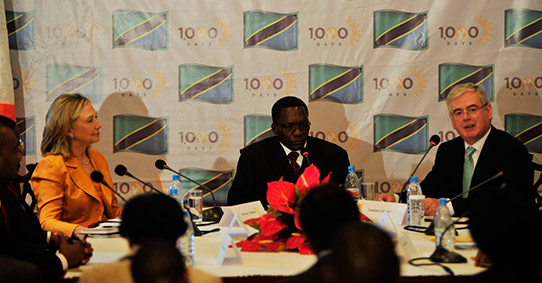 Ireland was a founding supporter of the Scaling Up Nutrition (or SUN) movement in 2010. This is now a growing global movement which includes forty six countries with high burdens of under-nutrition have now joined the SUN movement (January 2014). SUN brings together all stakeholders - donor and developing partner countries, UN and other international organisations and agencies, international financial institutions, civil society and business organisations - to tackle hunger and under-nutrition. It features a dedicated focus on maternal, infant and child under-nutrition, and focuses on increasing political will and investment to address under-nutrition in early childhood.

Ireland has also formed a strong partnership with the US, known as the Thousand Days Partnership, on advocating for good nutrition in the first 1,000 days of a child’s life - from pregnancy to the age of two - a critical period  for nutrient intake for growth and development.

Ireland is working hard to reinvigorate political dialogue at global, regional, country and local level in relation to making nutrition central to development with the objective of improving the nutrition status of the world’s poor and most vulnerable.

We encourage a multi-sector approach that integrates nutrition across related sectors including agriculture, food security, health, gender, education, and social protection and support a wide range of nutrition-sensitive interventions.

We also use our position to urge that women’s experiences as food producers and food providers be reflected in the response at all levels. For example, in 2012, we co-hosted a side-event at the UN Commission on the Status of Women called ‘Gender and Nutrition: Supporting Rural Women to Improve Nutrition.

Better coordination in our  partner countries

In our partner countries in Africa we work to improve co-ordination of action to improve nutrtition. In Ethiopia, for example, we are members of the Nutrition Donor group. We use our experience of what works locally to ensure that international policies and programmes are responsive to local needs.

In Malawi, we are Donor Convener for the SUN Movement. We are a member of the Agriculture Sector Working Group, and participate in four Technical Working Groups (Food Security and Risk Management; Agricultural Land and Water Management; Commercial marketing and agro-processing; Monitoring and Evaluation). We are also a member of the National Conservation Agriculture Task Force and the National Farm Inputs Subsidy Programme Task Force and participate in the Donor Committee on Agriculture and Food Security (DCAFS).

Read more about our support for improved nutrition and our involvement with the Scaling Up Nutrition (SUN) Movement.

Ireland has become a global leader in the fight against hunger.