Following more than half a century of internal conflict between the Colombian government and the Fuerzas Armadas Revolucionarias de Colombia – Ejercito Publica (FARC-EP)1, a peace deal was reached between the two parties in December 2016. While other Non-State Armed Groups (NSAGs) continue to operate, or are conducting separate peace negotiations with the government, the FARC agreement marks a significant advance towards lasting peace in Colombia.

The presence of landmines and other Explosive Remnants of War (ERW) remains a priority for the Colombian Government in establishing and maintaining peace in the country. In August 2019, a video was released by former FARC‐EP leader, Ivan Marquez (accompanied by a number of other key FARC‐EP figureheads) stating that a new armed conflict was to begin as a result of the Colombian government’s perceived failure to uphold government commitments outlined in the 2016 peace agreement. The FARC political party denounced the Marquez declaration, reinforcing their commitment to peace. The announcement of a new conflict has implications for the humanitarian demining sector, increasing the probability of more violent actions by dissident groups.

The HALO programme reached a number of milestones in 2019. The first of which was the clearance of one million square meters since the beginning of operations in 2013. HALO also celebrated its ten‐year anniversary in Colombia. The programme was successful in the handover of two complete municipalities in Antioquia department as landmine free, bring the total number of landmine free municipalities cleared by HALO to five. 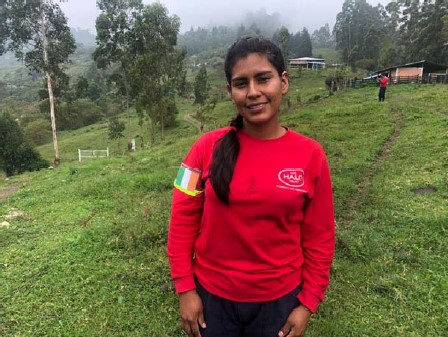 Anyeli Talaga (25) works as a deminer, she joined HALO in 2017. Originally from the municipality of Miranda, Cauca department, Anyeli is from the Nasa indigenous community. She is a single mother with an eight-year-old son, "my son is in the fourth grade of primary school, and despite being very young, he asks me about my work. He understands that the work I do, I do for him and he understands that I am working so we can have a better life".

Anyeli lives with her parents and two sisters in Miranda. While she is working, her mother and sister take care of her son. "My son sometimes asks me about my work, and I explain to him that we work for the communities here in Cauca and what we make the land safe for people to work and travel, without the danger of being hurt”.

Before joining HALO, Anyeli relied on informal employment to support her family and since joining HALO, she now has the benefits of formal employment. Being formally employed gives her access to improved medical care, paid holiday and a pension fund as well as support for her family through affiliations with family welfare schemes. HALO has also provided her with financial management skills and technical abilities that will help develop her career in later life. Working for HALO has provided Anyeli with opportunities to learn about new cultures by working with people from across the country, and how to work as a team, though most importantly it has provided economic stability for her and her family.

"I [financially] support my parents and my sisters, but especially my son. Now I have my own things. Working with HALO has given me motivation to fulfil my dreams, and for that, I am extremely grateful”.

Anyeli is one of the ten deminers funded by Irish Aid working in Cauca and Valle del Cauca and thanks to the continued support of the Irish Government, she is making an impact in her own community, by clearing minefields and restoring livelihoods to those affected by the conflict. "The people from the community are always very happy when we hand over their land as free of suspicion of mines. Had it not been for the support from donors such as Irish Aid, none of this would be possible".