The Liberation War of the 1970s left Zimbabwe with a huge mines problem in the form of hundreds of kilometres of very dense mine belts along the northern and eastern border with Mozambique. 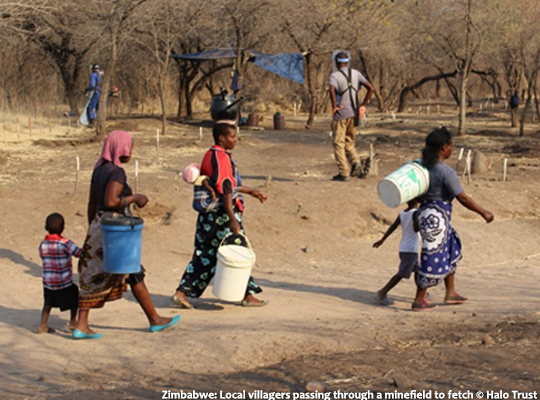 The sheer proximity of minefields to communities in this border area results in a high number of accidents, injuring and killing thousands of people.

Irish Aid has provided funding of over €2.5 million to HALO Trust's demining programme in Zimbabwe in the 2013-2019 period.

Large scale demining is needed to create a safe environment and to return agricultural and grazing land back to productive use in areas of high food insecurity.

Through HALO Trust, we are working with the Zimbabwe Mine Action Centre and the National Mine Action Authority for Zimbabwe to clear lands in the border areas in the northeast of the country.

Read more about our support for mine clearance and the impact it is having on the lives of people in Zimbabwe. 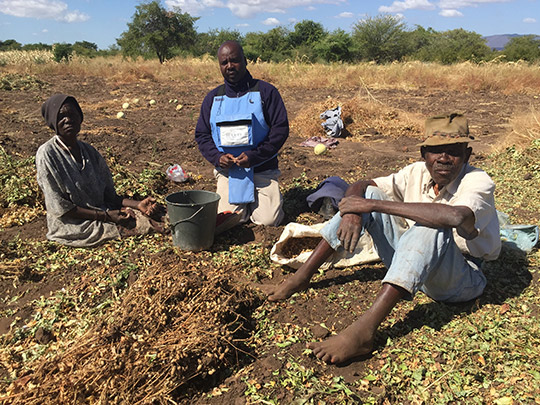 Mudeka and Dorika Chifendu live in Chisodza Village, where their land is currently being demined by HALO Trust, with funding from Irish Aid.

Painful. That is the world the Mudeka Chifendu and his wife Dorika use to describe the feelings they experienced upon returning home to find their once productive agricultural land sown with dense rows of landmines. Now in their mid-seventies, Mudeka and Dorika have lived in the village of Chisodza their entire lives except for a time during the Liberation War when they were re-settled in a protected village. While living in the village, they were told that their land had been mined. After the war when the Chifendus were able to return to their farms on the banks of the winding Chisodza River, they were well aware of the danger that lurked in the soil. However, with seven children to support and fertile fields hard to acquire, there was no choice to but continue farming in the minefields despite the hazards.

The mines were a risk that Mudeka was willing to tolerate in order to provide for his family, but the Chifundus were wary of letting their children play in the area. Only a narrow footpath through the minefield was used to fetch water while local herders tried to avoid the area by moving their livestock down the river bed when it was accessible during dry season. Despite these precautions there were many human and animal accidents. Mudeka was one of the unlucky ones; his accident happened in the early 2000's. While Mudeka knew the area was mined he needed to to keep cultivating in order to increase his yields. One day while hoeing the un-cleared ground, he struck a mine which detonated breaking his right arm, destroying his left eye and badly damaging his right one. One of his son-in-laws was able to drive Mudeka to the hospital in Karanda, but without savings and with no outside assistance, Mudeka was forced to sell one of his cows in order to cover the cost of the treatment. After recovering from his accident, Mudeka tried to stop using the mined area, but the pressure for more land was too great so he returned to farming the plot, all the while fearful of setting off another mine.

With funding from Irish Aid, in March 2016, the HALO Trust began clearing the Chifendu's field and to date has found and safely destroyed 160 mines. Doreka Chifendu remembers that when she saw the white painted sticks marking where HALO had removed mines, she was "so happy that God helped us remove this menace". Mudeka estimates that if he has had a good harvest, he will be able to collect 14-20 bags of maize next year on the land that has been cleared. At local prices this would earn him $630 to $900 dollars with which to support his family.

Aside from growing maize, groundnuts, millet, and sorghum, the Chifendus also use the land to grow pumpkins which they eat and share with their neighbours. With the extreme drought that Zimbabwe is currently experiencing, this year's maize harvest has failed, making the extra land crucial for the Chifendu's survival. Another benefit for the Chifendus is that they can now allow their 20 grandchildren to fetch water and play in the fields without worry. Smiling when asked if she was happy with HALO's work, Dorika responded that she was very happy and hopes that, "the spirit with which demining began in our area continues to all of Zimbabwe."