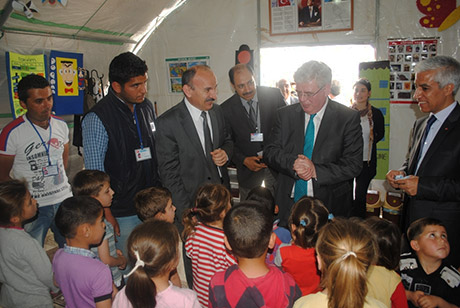 An Tánaiste, Eamon Gilmore, T.D., underlined Ireland’s strong commitment to meeting the humanitarian needs of affected Syrians with an additional €1 million in support.

Witnessing firsthand the disastrous effects of the Syrian refugee crisis in southern Turkey this week, Tánaiste and Minister for Foreign Affairs and Trade, Eamon Gilmore, T.D., underlined Ireland’s strong commitment to meeting the humanitarian needs of affected Syrians with an additional €1 million in support.

The humanitarian situation in Syria is appalling. There have been more than 70,000 fatalities. More than 1.3 million people have left their homes seeking sanctuary in neighbouring countries. 4 million people still inside Syria require urgent humanitarian assistance. The numbers affected are increasing on a daily basis.

Nizip Refugee Camp is one of the 17 sites established and managed by the Turkish Government to help cope with the large numbers of Syrians seeking refuge from the violence taking place in their towns and villages. During the Tánaiste’s visit there this week he heard about the traumatic experiences of some of the 11,000 Syrians now in Nizip. While there he also saw efforts to re-start education for the children in the camp. Children make up almost half of all refugees from this crisis.

Irish Aid’s additional €1 million in funding has been allocated to the International Federation of the Red Cross and the United Nations Refugee agency, UNHCR. This brings the total response of the Irish people to the humanitarian crisis in Syria to €8.15 million, which is supporting humanitarian activities inside Syria and across the region. This has been provided to key UN agencies, the Red Cross/Red Crescent and humanitarian agencies able to reach vulnerable populations.

Certainly without the generous support of Syria’s neighbours, this already dreadful situation would be much worse. It is estimated that over 400,000 Syrians have crossed the border into Turkey, representing an estimated 28% increase in the number of Syrians crossing the border since January 2013. This surge of refugees out of Syria puts terrible pressure on Turkey, as it has done on other countries in the region.

How we are allocating our funding: 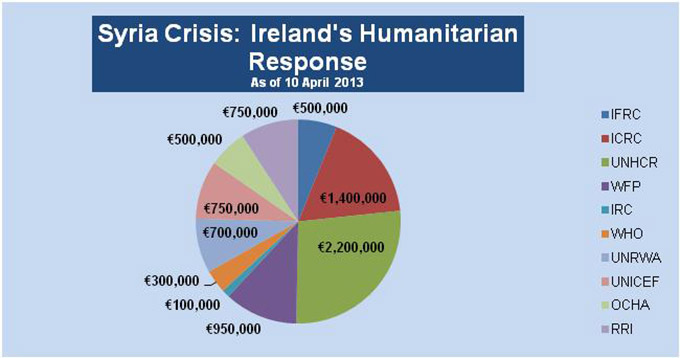 Irish Aid is closely monitoring the situation in Syria and the wider region, consulting our own colleagues in our Embassies and key humanitarian partners on the ground to assist us in making informed decisions about the provision of humanitarian assistance.  We insist on our aid to this crisis response being delivered in line with the humanitarian principles and according to need. In line with Good Humanitarian Donorship, Irish Aid also recognises its responsibility to meet pledges of support made in a prompt and transparent fashion.