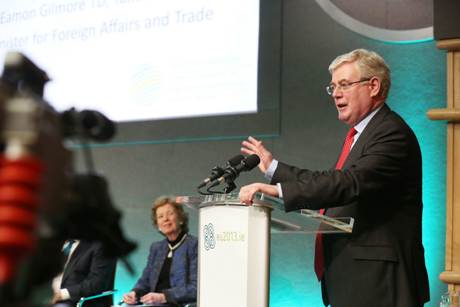 With over 350 delegates from 60 countries, the Hunger - Nutrition - Climate Justice (HNCJ) conference provided a unique platform to share knowledge, ideas and experiences that will strengthen our approach to ending hunger and undernutrition in the context of a changing climate.

“Global hunger in the 21st Century represents the grossest of human rights violations, and the greatest ethical challenge facing the global community.”

In his opening address to the conference, President Higgins highlighted that “Global hunger in the 21st Century represents the grossest of human rights violations, and the greatest ethical challenge facing the global community.” In order to successfully reduce the threat of hunger and undernutrition that faces millions, the role that climate change plays in exacerbating these risks must be recognised.

In addition to President Higgins, Tánaiste Eamon Gilmore and Minister Joe Costello, speakers at the conference included former President Mary Robinson, former US Vice President Al Gore and Ertharin Cousin, Executive Director of the UN World Food Programme. To strengthen the debate and make sure that the voices of those most affected by these challenges are heard, pastoralists, farmers and representatives of fishing communities also addressed the conference. From Malawi to Mongolia, their stories of the experience of tackling hunger and undernutrition in the face of a changing climate contributed hugely to the lively and productive discussions.  ‌

Amongst the many views expressed at the conference, including the urgent need to end hunger and undernutrition and respond to climate change, three key messages emerged:

Tánaiste Eamon Gilmore, in his closing remarks, pledged that Ireland will continue to be a champion for these issues and will bring the views expressed at the conference to the EU, the World Bank and the UN.

How do we work to alleviate hunger and malnutrition?

Watch our video on how support for farmers in Ethiopia has changed their lives.