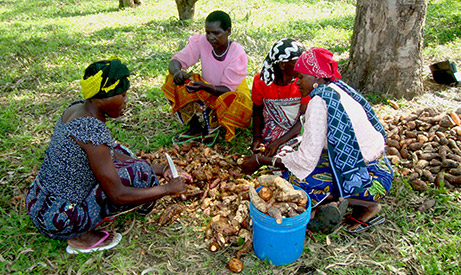 Potatoes are the world’s third most important crop and really important to efforts to improve global nutrition.

Potatoes are a good source of energy, fibre and vitamin C, which helps with iron absorption.  They can be grown in small plots and cooked and eaten with very little processing.

Sweet potatoes, which actually aren’t potatoes at all but a root vegetable, are a good source of Vitamin A, B, C and E. They can grow in a range of altitudes, from sea level to 2,500 metres, and almost all of the plant is edible, including the leaves, roots and vines. In some parts of Africa, sweet potatoes are dried and ground to make flour which can be used to make delicious and healthy cakes!

At Irish Aid, we support international partners such as the International Potato Centre, Concern Worldwide and Vita, whose initiatives promote potatoes and sweet potatoes as an important, easy to produce, and cost-effective source of nutrition and income.

In Malawi an Irish Aid funded project, implemented by the International Potato Centre, is assisting 70,000 rural households to combat hunger and malnutrition by encouraging and assisting farmers to grow sweet potatoes.

Our traditional Irish Potato is hugely popular in many parts of the world. So much so that in Zambia, these type of potatoes are known as ‘Irish potatoes’!