Commission on the Status of Women: Addressing Violence against Women and the links to HIV 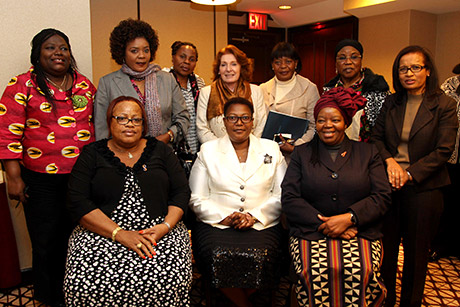 We recognise that ending violence against women is not only imperative in its own right, but it also reduces women’s risk of contracting HIV and AIDS.

When women do not have an equal say in every aspect of their lives and relationships, they are more vulnerable to violent treatment, including being forced to have unwanted and unprotected sex, which can result in the spread of HIV.  Sexual violence also increases vulnerability to HIV, as it often results in cuts and lesions which make it easier for the virus to be passed on.

Because of this we recognise that ending violence against women is not only imperative in its own right, it also reduces women’s risk of contracting HIV and AIDS.

We recognise that ending violence against women is not only imperative in its own right, it also reduces women’s risk of contracting HIV and AIDS.

We work with UNAIDS, the UN Agency tasked with leading the fight against HIV and Aids, and provide support to ensure that when responding to the HIV pandemic, issues of gender equality, including gender based violence are taken into account. Ensuring that these links are recognised at international level is also an important part of our work.

Communities also play an important role in tackling gender based violence and the spread of HIV. One example of this is our work with CEDOVIP a grassroots organisation in Uganda, working with communities to end violence against women. CEDOVIP were winners of ‘recognition in the Community-Based Response to AIDS’ at UNAIDS’ Red Ribbon Awards.

Speaking at the CSW, Minister of State Kathleen Lynch, said that “Addressing gender inequality in all its forms including gender-based violence is an important priority of the Irish Aid programme… Working with communities for communities is key”.

For this reason, Irish Aid supports a number of grass roots organisations which work with communities to support women to speak up and realise their rights, to combat the stigma that is attached to violence against women and to help to create a shared view in the community that violence against women is not tolerable and not acceptable.