Ireland leading on Human Rights and Development at the UN 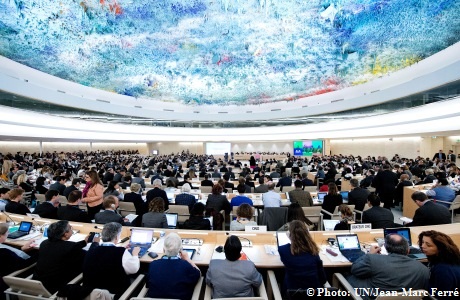 The week of 23rd September was a busy one for Ireland at the UN in New York and Geneva. In New York, world leaders gathered for the annual United Nations General Assembly meeting and in Geneva, two important new resolutions put forward by Ireland were adopted by the UN Human Rights Council. The first resolution aimed at reducing preventable diseases and deaths of children under five and the second at ensuring that civil society has a safe and enabling environment in which to operate.

Each year, some 6.6 million children under the age of five die mainly from preventable and treatable causes. Highlighting the fact that Ireland’s efforts on human rights and development are mutually reinforcing, Ireland, along with Austria, Botswana, Mongolia and Uruguay, led the passing of a resolution on preventable mortality and morbidity of children under five.  The resolution focused on how the Human Rights Council can set out a human rights based approach to this issue and support the engagement of the human rights community in strengthening accountability for children’s health.  With the adoption of this resolution, the Office of the High Commissioner for Human Rights - in close consultation with the World Health Organisation - will draw up guidance for national Ministries to help them act to reduce and eliminate preventable under-five mortality.

Ireland, with the strong support of Chile, Japan, Sierra Leone and Tunisia, also took the lead in preparing and negotiating a resolution on civil society space, which was adopted on 27 September.  In recent years, civil society actors such as human rights defenders, non-governmental organisation, trade unions and faith-based organisations have come under increasing pressure in many parts of the world, and in some countries the space for civil society engagement is narrow or shrinking. Restrictive legislation and repressive practices have led to stigmatisation, harassment, and even criminalisation of civil society actors.  The resolution calls on States to create and maintain a safe and enabling environment, in law and in practice, in which civil society can operate effectively and free from intimidation and harassment.  It also seeks to ensure that this issue receives the attention it deserves, by providing for the first formal debate on civil society space, to be held during the next session of the Human Rights Council, in March 2014.