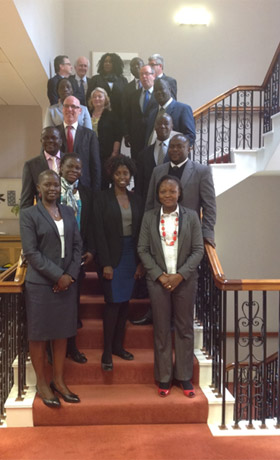 In partnership with Trinity College Dublin and the Justice Law and Order sector, Irish Aid successfully organised and conducted training in Ireland for Ugandan justice officials in August 2014. The training involved 7 Judges of the High Court of Uganda and 5 Prosecutors, including 2 officers from the Inspector General of Government Justice

The training was organised to strengthen the capacity of the Ugandan Judicial and Prosecution officers in the investigation and management of corruption cases. The officers liaised closely with the Irish Courts Service and Parliament, as well as the Prosecution Service, the Ombudsman, the Garda Ombudsman and a number of judges, barristers and other experts with relevant expertise. They also visited the Centre for Criminal Justice at both the University of Limerick and Trinity College Dublin.

The training was organised to strengthen the capacity of the Ugandan Judicial and Prosecution officers in the investigation and managment of corruption cases.

The training included visits to major Irish anti-corruption agencies, courts, classroom lectures, a former prison, and various social and cultural sites. Mr. Wangadya, the Deputy Inspector General of Government described how the team appreciated the “friendly, polite and extremely generous encounters” they had along the way.

He added that “no amount of words can aptly narrate the story of my experience in Ireland, which is very rich in culture and history.”

Justice Lawrence Gidudu explained how through the experience, they identified the need to amend the Ugandan law to provide for the management of property forfeited to the State.

If an agency were set up to manage such property, including its disposal, this would ensure the Ugandan Government profits from the value of seizures and forfeitures, as current Ugandan legislation does not specify which Government body should handle these issues.

The team acknowledged that the learning exchange and exposure gained through this initiative were excellent, enabling them to generate and share ideas with other senior judicial and officers engaged in the fight against corruption. The team has committed to sharing the learning they gained through the experience with their fellow colleagues, so that they can also benefit.