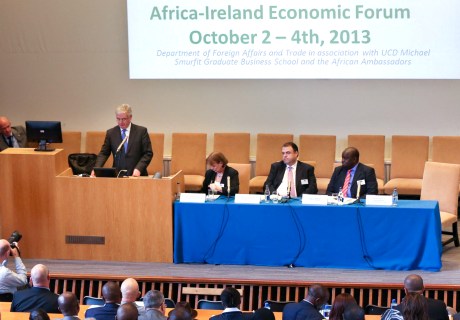 The scholarship will provide an African business woman with a place on the prestigious UCD Masters in Business Administration programme.

The Mwangi Scholarship was announced by the Tanáiste and Minister for Foreign Affairs and Trade, Eamon Gilmore at the Africa Ireland Economic Forum, held in October 2013.

The scholarship will provide a fully funded place each year for the next three years for an African business woman on the prestigious UCD Masters in Business Administration programme. The MBA scholarship will be jointly funded by the UCD School of Business and by Irish Aid.  UCD will identify the successful candidate through their own selection process.

The scholarship has been named as a mark of solidarity with the people of Kenya, and in memory of Mr Mbugua Mwangi and his fiancée Rosemary Wahito who were both tragically killed in the Westgate attack in Nairobi on 24th September 2013. Mbugua Mwangi is the only son of the former Ambassador of Kenya to Ireland, H.E. Catherine Muigai Mwangi and also the nephew of Kenyan President Uhuru Kenyatta. Catherine Muigai Mwangi opened Kenya’s embassy to Ireland in 2007, and served in the post of Ambassador until August 2013.

Find our more about the Mwangi Scholarship

Applications for the Mwangi Scholarship are open until the 31st March. Find our more on the UCD Michael Smurfit Business School site.