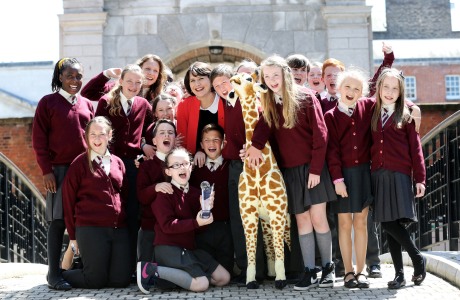 On the 17th June at Dublin Castle, the national final of the Our World Irish Aid Awards were held in Dublin Castle.

Eleven schools competed in the national final, chosen from the 60 schools that had made it to four regional finals held in Galway, Limerick, Cork and Dublin.

The St. Ciaran’s students came up with the idea of a 'wishing well', then asked pupils to write their wishes on paper stars and put them into the well. They also came up with the concept of a ‘secret box’ which claimed to have ‘the answer to all the world’s problems on the inside’. On opening the box users were confronted with their own reflection.

This year was the 9th year of the awards which are designed to engage primary school students in the Millennium Development Goals and development issues.

Check out photos from the event on our facebook page.

Find out more about the Our World Irish Aid Awards.

Learn more about our programmes for primary schools.