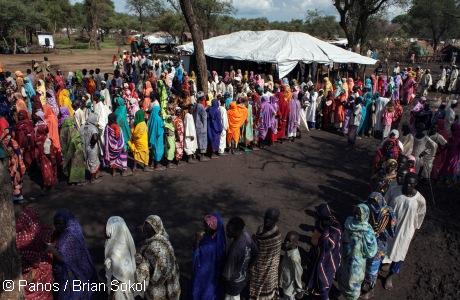 Seven out of every 1,000 people in the world are displaced or seeking refuge.

The 20th June marks World Refugee Day, and to mark the day UNHCR have launched their 2013 Global Trends Report. According to the report, for the first time since the post-World War II era, the number of refugees, asylum-seekers and internally displaced people has exceeded 50 million people.

It is a startling figure, meaning that 7 out of every 1,000 people in the world are displaced or seeking refuge.

7 out of every 1,000 people in the world are displaced or seeking refuge.

Irish Aid also maintains stocks of emergency supplies, so that when the need arises we are able to dispatch essential equipment to those who have been forced from their homes. Since 2013, Irish Aid has dispatched over 1,500 tents, 1,450 tarpaulins, and 65,000 blankets as well as hygiene sets and cooking equipment and other essentials.

This funding offers basic, life saving support to some of the most vulnerable people in the world.

How we respond to emergencies

Learn more about how Irish Aid is prepared to respond to emergencies.