Renewing our agreement to assist those in emergencies 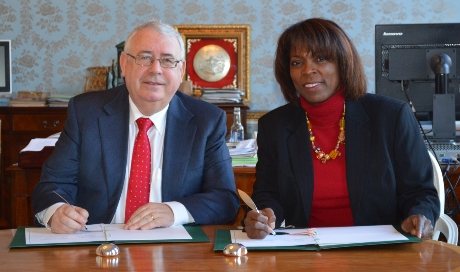 Minister for Trade and Development, Joe Costello and Executive Director of the World Food Programme, Ertharin Cousin signing the Letter of Understanding

This morning Minister of State Joe Costello met with the Executive Director of the World Food Programme (WFP), Ertharin Cousin, to discuss Ireland’s contribution to the UN’s Humanitarian Response Depots (UNHRD). At the meeting Minister Costello and Ertharin Cousin signed a Letter of Understanding between Ireland and the UNHRD.

The UNHRD was established in 2000 by the WFP with the purpose of having emergency stock, strategically located and ready to dispatch and distribute in times of emergency. There are five depots around the world in Brindisi (Italy), Accra (Ghana), Subang (Malaysia), Panama City (Panama), and Dubai (UAE).

Ireland’s partnership with the UNHRD dates back to 2006 which now constitutes a crucial pillar of our response to emergencies. Since that initial agreement, the WFP has managed the procurement and dispatch of Irish Aid emergency stock to humanitarian partners in the field such as Concern, Plan and GOAL.

Irish Aid provided partial funding to build a new facility in Accra for the storage of goods as well as providing two engineers from our Rapid Response Corps to manage the project.

The Letter of Understanding, which was signed this morning, renews our existing relationship with the WFP surrounding our use of the UNHRD. In this agreement Ireland has also committed €500,000 per year to maintain the network, and in return the UNHRD will ensure that the appropriate stocks are available at the 5 hubs in the event of the emergency.

Find out more about how Ireland Responds to Emergencies.