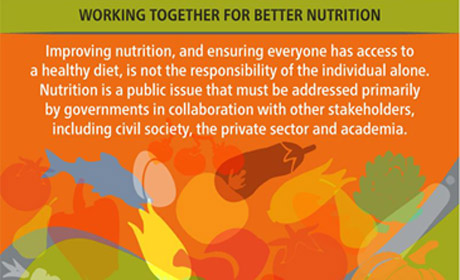 Improving global nutrition is a key factor for development

Ireland played a leading role at the Second International Conference on Nutrition (ICN2), an inter-governmental meeting held in Rome from November 19th to 21st. The ICN2’s focus was to keep nutrition high on international and national development agendas.

ICN2, attended by representatives from 190 countries, was jointly organised by the UN Food and Agriculture Organization and the UN World Health Organization, and was a follow up to the first conference, held in 1994.

Minister of Health Leo Varadkar led Ireland's delegation for the ICN2 conference, where he reflected on: Ireland's work to stabilise childhood obesity through the ‘Healthy Ireland’ initiative; ongoing efforts in Ireland to sustainably produce safe, nutritious food; and Ireland’s leadership and investment in nutrition through the Irish Aid programme.

On November 20th, Minister Varadkar also opened a side event co-hosted by Ireland on ‘Accelerating Progress to End Malnutrition: Action, Results and Accountability’. The event was attended by the governments of Brazil, Canada, Ireland and the US, as well as the Children’s Investment Fund Foundation, Save the Children, 1,000 Days and the Pan American Alliance for Nutrition and Development.

The Global Nutrition Report highlighted that “people with good nutrition are key to sustainable development” through the promotion of individual resilience in the face of shocks and uncertainties generated by climate change and extreme price fluctuations.

Find out more about: