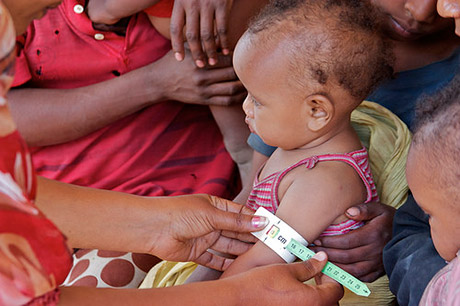 President Michael D Higgins and Minister Seán Sherlock today continued their visit of Tigray in northern Ethiopia with a visit to Abraha-Atsbeha health centre near Mekelle, where he saw Ireland’s contribution to health services in the area.

The President viewed all the facilities and services provided, including maternal and child wards, an ambulance service and an Irish Aid funded VSO (Voluntary Services Overseas) programme that aims to reduce neo natal deaths. The health centre serves over 25,000 people living in four local villages, and health services has improved considerably since its establishment in 2010.

The VSO maternal programme, in place since 2011, aims to reduce newborn deaths through the establishment of neonatal intensive care units, and by the placement of experienced international health care workers to train local medical staff. Five such units have been set up in Tigray, and the programme has led to a 50% fall in newborn mortality rates. In February 2014, the success of the programme was recognised when VSO received an award for good practices in health care from the Ethiopian Ministry of Health.

In 2013, Irish Aid provided €650,000 to the Tigray Regional Health Bureau for the construction of six maternal and child health clinics in health centres in the region, and the renovation of five others. The support included the provision of medical equipment and the installation of water supply schemes in 15 primary health care units, including the health centre.

Irish Aid has been supporting health services in Tigray since 1994 and by 2002 eight health clinics, three health centres and 55 health posts were built by Irish Aid. Since 2009, Irish Aid’s primary support to the health sector in Ethiopia has been through federal and regional sectoral support.