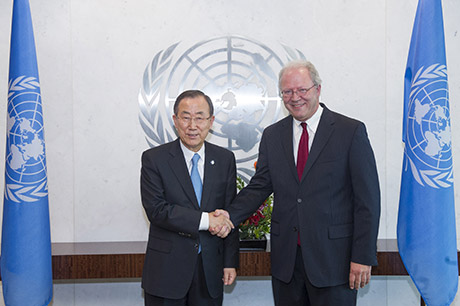 It is a great honour for Ireland that our Permanent Representative to the United Nations, Ambassador David Donoghue, has recently been appointed to co-facilitate the final phase of negotiations on a new global development agenda.

The negotiations will culminate in a summit of world leaders in September 2015, where the world’s nations will agree on a new set of global goals to succeed the Millennium Development Goals.

The Millennium Development Goals were a set of eight goals, ranging from halving extreme poverty and hunger to providing universal primary education to promoting gender equality. They were agreed by all nations in 2000 with set targets to be achieved by 2015. The MDGs have galvanized unprecedented efforts to meet the needs of the world’s poorest, and brought critical focus to development work. ‌

Huge progress has been made in reaching the targets set by the MDGs, and several of the goals have been met before the 2015 deadline – as can be seen in the 2014 report here. However, several of the targets have not yet been met and progress is patchy from a regional perspective The world must now take stock and agree a new set of goals for the post-2015 period.  These new goals are being referred to as the Sustainable Development Goals – or the SDGs.

The SDGs will entail responsibilities and actions for all countries, and will aim to eradicate extreme poverty and achieve sustainable development at a global level by 2030. Ambassador Donoghue and his team at the Permanent Mission of Ireland to the UN in New York will play a critical role in facilitating consensus on these goals among the 193 Member States of the United Nations. They will work closely with fellow co-facilitator, H.E. Mr Macharia Kamau, the Permanent Representative of Kenya.

The appointment of Ambassador Donoghue is evidence of the international community’s appreciation of our overseas aid programme and other efforts made by Ireland to support vulnerable populations abroad.  We are confident that the process will culminate in a successful outcome at next years’ high-level summit, and that the new Sustainable Development Goals will have a profound impact on the lives of the world’s poor.