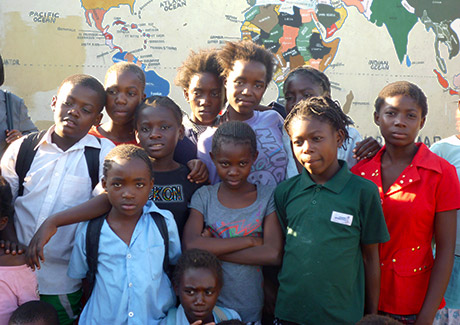 Irish Aid is committed to strengthening gender equality by supporting girls’ rights to education, and by protecting them from gender based violence worldwide.

The 11th of October is the United Nations International Day of the Girl Child. The theme for 2014 is “Empowering Adolescent Girls: Ending the Cycle of Violence.”

Girls suffer from various forms of discrimination and abuse as a result of both their gender and age. For example gender based violence within schools, which it is often most prevalent and widespread in countries which are experiencing conflict or emerging from conflict, has been a major barrier to girls accessing their right to education.

Irish Aid is committed to tackling such problems. Strengthening gender equality, promoting women’s rights and supporting girls’ access to education are central to Ireland’s policy for international development -“One World, One Future (2013).”

Irish Aid spent €35.8m on education in 2013, of which €16m was spent in key partner countries such as Ethiopia, Tanzania, Vietnam, Mozambique, Zambia and Uganda. To influence and inspire female students, in 2013 Irish Aid supported the recruitment and deployment of female teachers to school areas where girl attendance rates are low.

In Mozambique, the education programme is continuing to challenge practices that prevent girls from remaining in primary and transitioning to secondary school.

Furthermore, Irish Aid provided €5m to the Global Partnership for Education which focuses on addressing the barriers to girls’ education in low income and fragile states.

The elimination of sexual and gender based violence, is another key priority for Irish Aid, and per capita Ireland is the biggest worldwide donor to Sexual Gender Based Violence (SGBV) programmes.

Irish Aid has also been a strong supporter of the UN Trust Fund to End Violence against Women and Girls which has benefitted 3 million people (including more than 30,000 survivors of violence) in 2013.