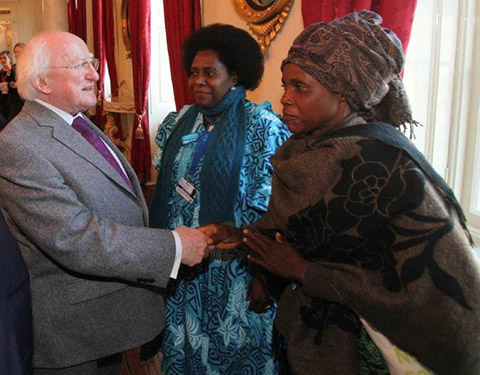 In Ethiopia, Irish Aid funded programmes are a making a big difference to the lives of thousands of people.

President Higgins will embark on a three week visit to Africa on Saturday the 1st of November, where he will visit Ethiopia, Malawi and South Africa. He will visit many Irish Aid funded projects in Ethiopia and Malawi, two of Ireland’s key partner countries.

In Ethiopia, Irish Aid funded programmes are a making a big difference to the lives of thousands of people, such as refugees in the Gambella, and small farmers in the Tigray region.

There are an estimated 240,000 refugees in the Gambella region of south-western Ethiopia, fleeing from the ongoing conflict in South Sudan.

President Higgins will later visit the Tigray region in northern Ethiopia, where he will see firsthand the difference that Irish government funding is making to the lives of small scale farmers, through the work of the Tigray Agricultural Research Institute (TARI).

TARI has supported farmers with better crop varieties, animal breeding and skills to help farmers combat climate change and increase productivity, which has transformed the lives of over 6,000 farm families.

During his visit to Africa, President Higgins will meet with many Irish Aid funded local organisations that are transforming their communities, such as women’s groups and local charities. In South Africa, the President will meet with Sonke Gender Justice, an organisation that campaigns for gender justice and against gender based violence in the country.