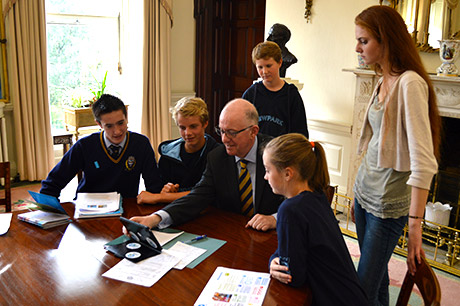 UNICEF Ireland will host a Youth Summit in Dublin Castle on Friday 19th September on how to build a world fit for children. Ahead of this, Minister Charlie Flanagan met five UNICEF Youth Ambassadors on Wednesday 17th.

The delegation delivered the ‘Dublin Declaration on Children & Youth 2014’ containing results of a UNICEF Ireland survey of young people which was funded by Irish Aid. The survey - ‘It’s About Us’ - sets out what young Irish people see as the major global development challenges. The five youth ambassadors, aged 13-16, were accompanied by Peter Power, Executive Director of UNICEF Ireland.

“This campaign has played an important role in mobilising the youth of Ireland to reflect on the state of the world, their role in it, and what sort of world they would like to live in.” Minister Flanagan

More than 2,500 young people in Ireland have voted in the on line survey. Among their top priorities are health, education, poverty and hunger, safety from harm, and equality.

Irish Aid has a strong focus on improving the lives of children in the developing world. Our programmes and partnerships – including with UNICEF – are designed to tackle child malnutrition, increase access to quality education and protect children from harm in humanitarian crises.

Ireland provided over €8 million in core funding to UNICEF in 2013 as well as an additional €2.25 million this year for emergency operations in Iraq, Lebanon and Syria. Ireland’s support to UNICEF helps the world’s most disadvantaged children to reach their full potential with targeted measures to save and enhance their lives. As a result of Ireland’s support, UNICEF efforts to help communities affected by crisis or disaster to rebuild their lives.

For more information on the ‘It’s About Us’ campaign, visit http://www.unicef.ie/itsaboutus