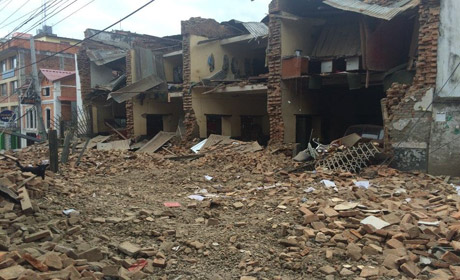 The Nepal Earthquake has resulted in the deaths of over 5000, with 10,000 injured and massive damage to homes, roads and infrastructure.

Irish Aid is playing its part to respond to the devastating 7.8 magnitude earthquake which hit Nepal last weekend. The death toll is over 5,000, with another 10,000 injured and hundreds still missing.

Eight million people have been affected more than a quarter of the country's population of whom 1.4million are in urgent need of food and assistance.

The Government of Nepal reports that some 70,000 houses have been destroyed, and another 530,000 homes damaged across 39 of Nepal’s 75 districts, including the Kathmandu Valley districts. The earthquake has caused significant damage to infrastructure and roads. Collapsed buildings and rubble have blocked access to affected areas and populations. Landslides have also been reported, further hampering access to more remote locations.

Temporary tented camps are currently being established for displaced families around Kathmandu and shelter, health, food, medical supplies, water and sanitation, and restoration of communications are urgent priorities.

Ireland has provided initial funding of €1,000,000 to respond to the crisis, through Irish Aid’s Emergency Relief Fund Scheme (ERFS) and Rapid Response Initiative (RRI). The ERFS provides funding to Irish NGOs which are active on the ground in Nepal, and are experienced in humanitarian crises of this scale.

Under the RRI, Irish Aid is arranging airlifts of emergency relief items such as tents, blankets, and tarpaulins to assist an estimated 12,000 vulnerable people and meet their immediate acute needs.  Over 63 tonnes of Irish stocks will be distributed by Plan in the Kathmandu-Makwanpur area, focusing on those most severely affected, and those living in temporary settlements or in the open air since their homes were destroyed.   Irish Aid is also considering further requests for deployment of essential relief items and highly-skilled emergency specialists through the Rapid Response Initiative.

In addition, a number of Irish Aid’s long-term partners are responding to the crisis. US$15 million has been provided from the UN’s Central Emergency Response Fund (CERF) to support scale-up of response activities. Ireland was one of the top 10 donors to the CERF in 2014. €500,000 has also been provided from its International Federation of the Red Cross – to which Ireland contributes - to support the Nepalese Red Cross in their initial relief efforts.

For information on how you can help the victims of the Nepal earthquake, please visit howyoucanhelp.ie