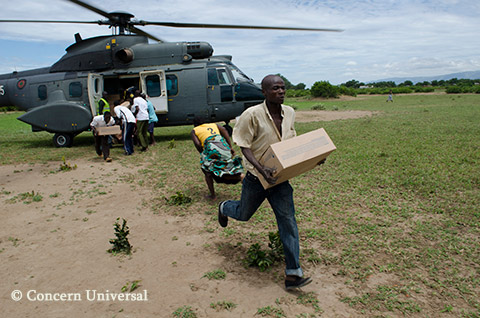 Irish Aid supplies are delivered by Concern Universal to those affected by severe flooding in Malawi.

This year’s theme – ‘Share Humanity’ - calls on everyone to share stories of people affected by war, natural disasters, famine or major health epidemics.

Around the world, nearly 60 million people are now forcibly displaced – the largest number since World War II. There were 46 highly violent political conflicts in 2014 - an increase of about one per year since 2003. Natural disasters are also occurring with greater frequency and intensity, often recurring before communities and countries have time to rebuild. By 2050, it is estimated that up to one billion people around the world could be displaced by the impact of climate change.

Ireland has a strong history of supporting humanitarian action in order to save lives, alleviate suffering and maintain human dignity during and in the aftermath of emergencies.

Ireland has a strong history of supporting humanitarian action in order to save lives, alleviate suffering and maintain human dignity during and in the aftermath of emergencies. In 2014, a total of €85 million was provided through the Government’s aid programme, Irish Aid. This funding supported life-saving needs in emergencies such as Syria, South Sudan, Central African Republic, Iraq, DRC and Gaza and to respond to the Ebola crisis in West Africa.

Humanitarian funding also supported communities in ‘forgotten crises’ such as in Sudan, Somalia, Afghanistan and Ethiopia. Ireland is one of the top 10 donors worldwide annually to the UN Central Emergency Relief Fund (CERF) which ensures rapid and reliable humanitarian assistance to those affected by natural disasters and armed conflicts.

Under Ireland’s Rapid Response Initiative, 259 tonnes of emergency relief items have been airlifted into humanitarian crises on six occasions so far in 2015, helping an estimated 58,000 beneficiaries in Malawi, Cameroon and Nepal.  16 members of Ireland’s Rapid Response Corps have also been deployed to date in 2015 to South Sudan, Sudan, Malawi, Jordan, the Central African Republic, Nepal, Ghana, and Guinea, working as surge capacity with our UN partners on the ground.

In July of this year, Ireland launched its updated Humanitarian Assistance Policy, which outlines how Ireland will assist those most vulnerable before, during and after humanitarian crises.