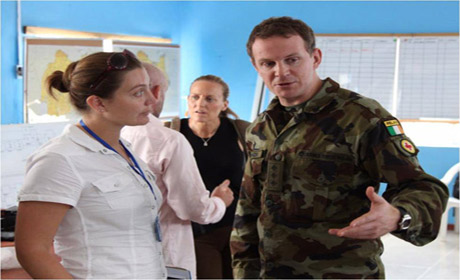 The Irish Aid team at our Embassy in Freetown played a crucial role in the international aid effort, as did Irish NGOs and volunteers, and members of the Irish Defence Forces.

Earlier this month the World Health Organization (WHO) declared the end of the Ebola outbreak in Sierra Leone. The news was received with a mixture of joy and grief by the people of Sierra Leone – joy that this devastating chapter had finally concluded and grief for the 3,589 people who had lost their lives. The President of Sierra Leone, Ernest Bai Koroma, led a midnight countdown at the National Ebola Response Centre on 7 November 2015 to mark the occasion.

Ireland has played an active role in combatting the Ebola outbreak in Sierra Leone: in helping to contain the virus, in providing care to those affected and in addressing the wider impacts of the devastating outbreak.  The Irish Aid team at our Embassy in Freetown played a crucial role in the international aid effort, as did Irish NGOs and volunteers, and members of the Irish Defence Forces who were deployed to Sierra Leone.  In October 2014, Minister of State Seán Sherlock was the first European Minister to visit Sierra Leone since the start of the outbreak, signalling the support of Ireland and the international community for the Government and people of Sierra Leone.

Confirmation of the end of the outbreak in Sierra Leone represents a key milestone in national and international efforts to eradicate Ebola from the three countries in West Africa - Sierra Leone, Liberia and Guinea - which were most affected by the disease. Particular tribute is due to the Government and people of Sierra Leone and to the national and international health care workers who battled to bring the epidemic under control, often at great personal sacrifice. Of the 3,589 people who lost their lives, 221 were health care workers.

A small number of cases of Ebola have been reported in recent weeks in Guinea, close to the border with Sierra Leone. And while more cases are possible, including in Sierra Leone, the rapid response systems which are being put in place should help to contain future cases and reduce the risk of further serious outbreaks.

Last year Irish Aid provided a total of over €18.5 million to the Ebola-affected countries in West Africa, including through NGOs.

Before the Ebola outbreak, and recognising the serious challenges that existed, Irish Aid was already working to strengthen health systems in Sierra Leone and Liberia; this work became even more critical in the context of the Ebola crisis.

Irish Aid has also worked to address the immediate impacts of Ebola by supporting treatment facilities in both Sierra Leone and Liberia, helping to ensure contact-tracing and community sensitisation, and funding ambulance and burial teams.

This year, the Irish Aid programmes in Sierra Leone and Liberia continue to focus on the effects of the Ebola outbreak, with programme funding of €7.5 million for Sierra Leone and €5.5 million for Liberia.  We are helping to ensure access to appropriate healthcare and formal education for pregnant schoolgirls in Sierra Leone, as teenage pregnancies increased during the Ebola period. We continue to work with the Liberian Government to develop a more robust, effective and accountable health system. We are also supporting nutrition interventions to mitigate the effects of Ebola on the most vulnerable households.

The 7th November declaration represented a significant milestone.  However, although now free of Ebola transmission, Sierra Leone and Liberia have still a long road to travel in recovering from the devastating effects of Ebola and in securing the necessary economic and social development to ensure a bright future for the people of both countries.  Irish Aid will continue to support them on this journey, with assistance to the most vulnerable as our priority.

Read more about the work of Irish Aid in Sierra Leone.