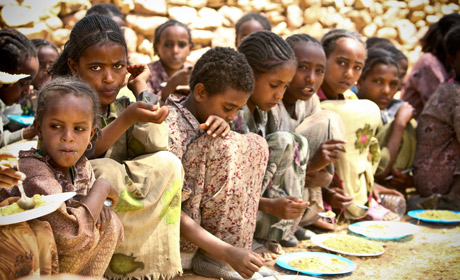 Today’s €2 million funding announcement brings Ireland’s total contribution to meeting the urgent needs of those affected by this devastating drought to €5.5 million this year

The Minister for Development, Trade Promotion and North South Co-operation Seán Sherlock has announced that the Irish Government will contribute an additional €2 million to the international response to the drought in Ethiopia.

Ethiopia is currently facing a severe drought, perhaps the worst in 30 years. According to the Ethiopian Government, an estimated 8.2 million people will need food aid this year, while the United Nations estimates that up to 15 million people will need support in early 2016. Ireland, through its development cooperation programme Irish Aid, supports the Ethiopian Government in building its humanitarian capacity and a social protection system capabilities. This enables Ethiopia to identify and respond to crises early, which saves lives and protects the livelihoods of those most affected by the impacts of severe drought and climate change.

Today’s €2 million funding announcement brings Ireland’s total contribution to meeting the urgent needs of those affected by this devastating drought to €5.5 million this year.

In addition, Ireland is providing over €26 million through our bilateral aid programme in Ethiopia to address poverty, vulnerability and hunger. Ireland is involved in many long term development programmes aimed at helping vulnerable rural communities to adapt to the challenges posed by climate change. These programmes include innovations in watershed management, crop rotation and the introduction of new technologies to boost crop yields. As a result of these projects, in addition many other long term programmes to assist vulnerable farmers and rural families to cope with the short term (but often drastic) consequences of sudden climate shocks, Ethiopia is recognised as a leader in preparing for climate change.

World leaders are currently turning their attention to the United Nations Climate Change Conference taking place in Paris this December, where they hope to agree on a global framework for tackling climate change.

One key Ethiopian project that Ireland supports is the Productive Safety Nets Programme which provides food and cash to millions of people each year to assist them during the lean months ahead of harvest. In 2016, 8 million people are expected to benefit from this programme, which is an excellent example of collaboration between of Irish Aid, the Ethiopian Ministry of Agriculture, the World Bank and many other international partners.

There is a lot we can learn from Ethiopia in tackling climate change. Ethiopia has shown leadership in re-allocating domestic resources to meet the immediate needs of those whose crops have failed.

This meeting, which will be attended by both Taoiseach Enda Kenny and the Ethiopian Prime Minister Hailemariam Desalegn, highlights how even well-prepared countries like Ethiopia remain vulnerable to the effects of climate change.

Irish Aid will continue to closely monitor the drought in Ethiopia and together with our NGO partners such as Goal, Concern, Trocaire, Self Help Gorta and Vita, we will work to ensure that our assistance in 2016 reflects the needs on the ground.

Learn more about our work in Ethiopia, the Productive Safety Nets Programme and how our aid programme works.