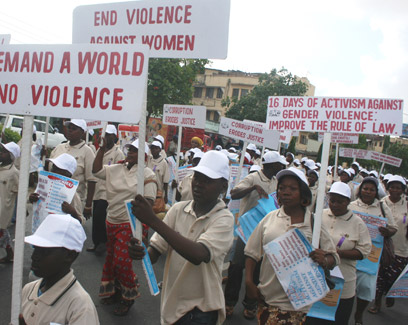 The International Day for the Elimination of Violence against Women on 25th November aims to promote awareness of violence against women and girls all over the world. Gender based violence is one of the most pervasive and persistent forms of human rights abuse and undermines the health and well-being of millions of women and girls around the globe.

At least one in three women has been a victim of physical and/or sexual violence at some point in her life. In some countries this figure can be as high as seventy percent. It is estimated that almost half the women killed globally are killed by an intimate partner or family member. Today, more than 700 million women have been married before the age of 18, with 250 million of those being married before the age of 15. Approximately 130 million women have undergone some form of female genital mutilation, exposing them to lasting physical and psychological injuries.

Recognising these challenges, preventing and responding to violence against women and girls is a central priority for Irish Aid and is at the core of our work to promote gender equality and women’s empowerment. For example, in Uganda, Zambia, and Sierra Leone, we work closely with national governments and civil society organisations to support service delivery for survivors of violence and to lobby for the development and implementation of laws and policies to prevent such violence from occurring.

Ireland also prioritises the issue of violence against women and girls in its global engagement, for example, by advocating for the inclusion of specific targets in the UN’s Sustainable Development Goals, adopted by the world’s leaders in September 2015. These targets will be instrumental in catalysing global action on the elimination such violence by the year 2030. Irish Aid also has longstanding partnerships with initiatives such as the UN Trust Fund to End Violence against Women and Girls whose work has benefitted almost 90,000 survivors of gender based violence in 2014.

Ireland also prioritises the issue of violence against women and girls in its global engagement, for example, by advocating for the inclusion of specific targets in the UN’s Sustainable Development Goals

As women and girls are particularly vulnerable to violence in emergency situations, Irish Aid prioritises their protection in its humanitarian action, for example in our response to the Syrian crisis, to which we have provided €41 million in support since the crisis began in 2012. In addition, the Department of Foreign Affairs and Trade launched, earlier this year, Ireland’s second National Action Plan on Women, Peace and Security earlier this year. The plan identifies concrete commitments which will ensure the protection of women and girls in conflict affected situations and promote women’s empowerment and participation in decision-making in conflict prevention and peacebuilding processes.

To mark both the International Day for the Elimination of Violence against Women and the beginning of the 16 Days of Activism against Gender Based Violence, Irish Aid was honoured to be a part of the Irish Consortium on Gender Based Violence seminar in Dublin in partnership with the National Women’s Council and the National Youth Council.  Speaking at the event HeForShe Champions President Michael D. Higgins and Minister for Development, Trade Promotion and North South Co-operation Sean Sherlock T.D. both underlined importance of engaging men & boys in combatting gender based violence

16 Days of Activism against Gender Based Violence