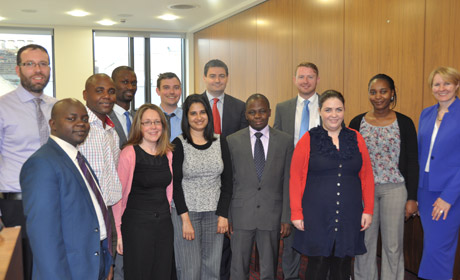 Kenya Delegation with staff of the Institute of Chartered Accountants

A team of auditors from the Kenyan Office of the Auditor General were in Ireland last month to complete important training on forensic auditing.

The training was undertaken by five members of the Office of the Auditor-General of Kenya, which was delivered by the Institute of Chartered Accountants in Dublin.

The training will raise the capacity of the Kenyan Auditor-General to investigate all aspects of fraud and corrupt practice in the use of public funds.

This type of training is a first for Kenyan Government personnel, and will raise the capacity of the Auditor-General to investigate all aspects of fraud and corrupt practice in the use of public funds in Kenya.

The team also spent two days with officials from the Irish Office of the Comptroller and Auditor General, and met with the Evaluation and Audit Unit within the Department of Foreign Affairs and Trade.

Read more about Irish Aid’s work on Accountability and Governance