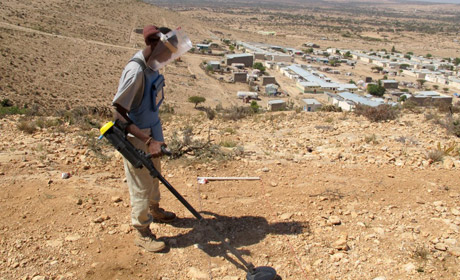 Land mines kill and maim thousands of civilians every year, and impede development by blocking access to agriculture, education and healthcare. Worldwide, Irish Aid supports its demining partners to remove these deadly mines and unexploded ordnance (UXO) from the ground so that communities and their children can live safer, more productive lives.

Funding for humanitarian mine actions programmes, including weapons and ammunition disposal, contributes to Ireland’s disarmament and treaty priorities by reducing risk to civilians from remnants of past conflicts. Mine action is a key issue for Irish Aid because it increases access to agricultural land for smallholder farmers, who are the mainstay of rural economies in Africa and Asia.

All of these countries were selected for support due to the severe nature of their land mine and UXO hazards. Afghanistan, for example, remains one of the most densely mine affected countries in the world, where hundreds of communities, comprising of more than 1 million Afghans, live within 500 metres of these hazards.

The Liberation War of the 1970s left Zimbabwe with a huge mines problem, with hundreds of kilometres of very dense mine belts along the northern and eastern border with Mozambique. Vietnam’s problems with mines and UXO has also persisted, long after the war’s end in 1975.

Over the period 2006 to 2015, overall Irish Aid funding for mine clearance and awareness programmes amounted to  €35 million, which supported demining needs in Afghanistan, Mozambique, Somaliland, Zimbabwe, Angola, Iraq, Cambodia, Myanmar and Vietnam.

Find out more about our mine clearance work: https://www.irishaid.ie/what-we-do/responding-to-emergencies/irish-aid-humanitarian-mine-clearance-work/