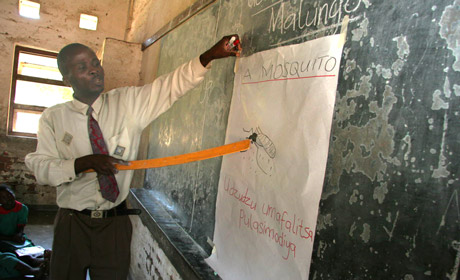 In Malawi, a teacher explains to school children about mosquitoes and malaria (Photo © WHO/ S.Hollyman)

Malaria is a life threatening disease, contracted by infected mosquito bites. Symptoms include fever and vomiting, and malaria can be deadly if untreated. Malaria affects people in 95 countries worldwide and was responsible for 438,000 deaths in 2015. Children are particularly vulnerable, with 70% of all malaria-related deaths in 2015 occurring in children under the age of five.

One of the previous UN Millennium Development Goals was to halt the spread of malaria, and to reduce the incidence of new cases by 2015. These goals have been met. However there is still a long way to go in the fight against malaria, and 3.2 billion people remain at risk worldwide. As part of the UN Sustainable Development Goals, adopted in 2015, Ireland is committed to helping end the malaria epidemic by 2030.

Irish Aid supports the Global Fund to Fight AIDS, Tuberculosis and Malaria, and was one of its founding members in 2002. Worldwide, the Global Fund provides more than 58% of all international funding for malaria.

The Global Fund aims to reduce the impact of malaria through education, prevention, diagnosis, treatment and monitoring. It does this in a number of ways, such as spraying homes with insecticide, distributing insecticide-treated bed nets, and supplying national health systems with medicines for treating malaria.

Advances in technology have also helped the fight against malaria. Until recently, time consuming and expensive laboratory tests were required to test for the disease and these were not commonly available. Now, Rapid Diagnostic Tests are able to detect malaria in minutes and can be used in remote settings with little training.

One of the biggest challenges facing the fight against malaria is the rise of drug resistance. Research into finding new and better drugs to treat malaria is therefore vital. The Medicines for Malaria Venture (MMV) is working to find new drugs to combat the rise of drug resistant malaria, and is also hoping to develop a cure for malaria that will be effective with only one dose. Irish Aid has supported MMV in their research since 2006.

With our continued partnerships, Irish Aid can help to end malaria for good.

Find out more about the campaign to eliminate malaria