Minister of State for the Diaspora and International Development, Joe McHugh TD visited Uganda, one of Irish Aid’s key partner countries, from 8-11 July 2016. In his first visit to Africa in his new role, the Minister visited Karamoja region in the north east of Uganda; a refugee settlement in Adjumani, near the border with South Sudan; and he also signed a Memorandum of Understanding on a five year strategy for engagement with Uganda. 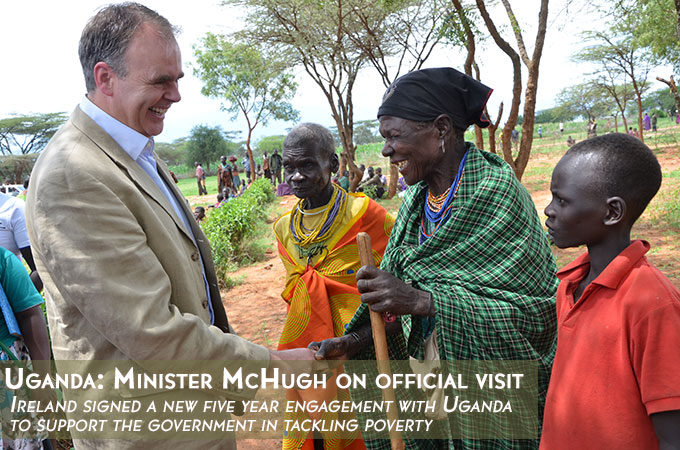 The centrepiece of Minister McHugh’s visit was the launch of Ireland’s new five year strategy for engagement with Uganda. The strategy provides a framework for Irish Aid support for poverty reduction in Uganda, amounting to an envisaged €82.9 million over the period 2016-2020, and will also have a focus on building trade, political, cultural, and people-to-people links.

Ireland and Uganda have a long history of partnership stretching across many decades. This partnership has its roots in the work of Irish missionaries, who created strong bonds between Ireland and Uganda. Since 1994, the Irish Government has had a significant bilateral aid programme in Uganda and made a lasting contribution to the country’s development.

Over the coming five years, Irish Aid will redouble efforts to support the poorest and most vulnerable to work their way out of poverty – targeting our interventions in the areas of education, social protection, preventing HIV/AIDS, and promoting human rights and good governance.

In line with our commitment to reaching the poorest, close to half of Ireland’s funding will be spent in the north-eastern sub-region of Karamoja, where poverty rates are higher than anywhere else in Uganda. The Irish Aid programme aligns with Uganda’s Second National Development Plan, and will be implemented through trusted partners, with strong accountability, in close cooperation with the Ugandan Government. 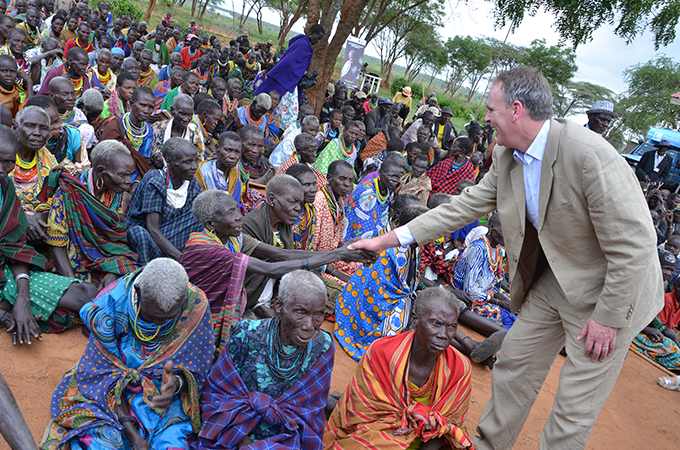 During the visit, Minister McHugh met with the organisations that work with Irish Aid in the implementation of Ireland’s development programme and also the direct beneficiaries of the programme – including people living with HIV, elderly recipients of the Senior Citizens Grant, children who are supported to attend school, and South Sudanese refugees who have fled to Uganda.

During the visit, the Minister also announced €600,000 in total funding to the World Food Programme and the UN Refugee Agency for their work in three refugee settlements in Uganda.

"Today, I have heard first-hand the stories of the refugees who have fled over the border to Uganda from South Sudan. The brutal conflict in South Sudan has caused immense human suffering - the refugees I met today are desperate for peace and the chance to build a life for themselves free from fear and violence.

"The renewed violence and killings over the weekend will only bring more suffering. There is a clear obligation on all sides, and especially on their leaders, to halt the violence immediately. In the interests of the people of South Sudan, they need to fully implement the Agreement on the Resolution of the Conflict in South Sudan - and finally to give peace and development a chance.

"I have not only been impressed by the fortitude and courage of the refugees I met today, but also by the generous welcome they have been given by the Ugandan Government and people. Uganda hosts well over 500,000 refugees, making this the third largest refugee population to be hosted by any country in sub-Saharan Africa and the eighth largest in the world. It is very often the world's poorer countries who are at the front line of the global humanitarian and migration crisis. Despite Uganda's own challenges in tackling poverty, it generously welcomes refugees who have fled conflict in their own countries, and implements a very progressive refugee policy.

"The Ugandan Government is working hard to offer hope to the South Sudanese refugees through education and temporary homes. I would like to acknowledge the powerful partnership effort by the Government and all the stakeholders to give renewed hope to a displaced population and set them on the road to reclaim their dignity, as they await for peace and a return to their homeland of South Sudan.

"I have also seen the crucial and challenging work of the UN Agencies and NGOs, in partnership with the Ugandan Government, to ensure that refugees have access to food, water and sanitation, health services, education and protection. In support of this effort, I am pleased to announce new funding by Ireland of €400,000 to the World Food Programme (WFP) and €200,000 to the UN Refugee Agency (UNHCR) for their work in three refugee settlements. We have already provided €1 million to UNHCR for its support to South Sudanese refugees in Uganda and the wider region."

"The announcement brings total Irish Aid humanitarian funding to South Sudan, including South Sudanese refugees in the region, to more than €8 million so far this year."

The Minister also discussed with Uganda’s Minister for Finance, Planning and Economic Development on how Ireland and Uganda can work together towards the attainment of the Sustainable Development Goals by 2030.

Find out more about Ireland’s work in Uganda