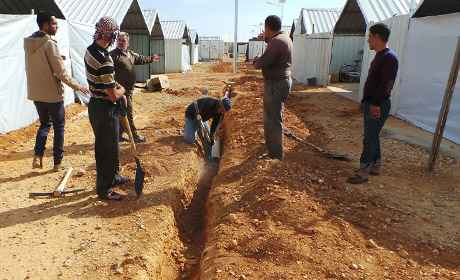 UNICEF expanding and improving the water and sanitation services in Azraq

They are fleeing the war in Syria which has killed more than 270,000 since 2011. More than 4.8 million Syrians have fled to neighbouring countries and a further 6.6 million are displaced within Syria.

Minster of State for Development, Trade Promotion and North-South Co-operation Seán Sherlock visited Azraq camp with Irish Aid officials in October 2015, and met with refugee families from Syria, and with UNICEF and UNHCR officials. The Minister saw first-hand how poor water, sanitation and hygiene services caused significant hardship for families living in Azraq, where water was delivered to the camp in tankers, and refugees had to walk long distances to carry water to their shelters.

UNICEF officials explained that the provision of good quality water and sanitation services requires significant investment in infrastructure, a task which is particularly hard in Jordan, one of the most water scarce countries in the world. However, investment would allow the provision of more cost efficient essential water services.

Following Minister Sherlock’s visit, Ireland announced €500,000 in funding to UNICEF specifically for the development of water and sanitation facilities in Azraq camp. UNICEF has been expanding and improving the water and sanitation services in Azraq, drilling a borehole and piping this water to tap stands in the camp, creating disabled access to washrooms and providing waste water treatment.

UNICEF has been expanding and improving the water and sanitation services in Azraq, drilling a borehole and piping this water to tap stands in the camp, creating disabled access to washrooms and providing waste water treatment.

The initial work of this project was completed in April 2016, with 1,000 residents benefiting from reliable, clean water supplies, and 250 residents have new waste water connections from their shelters. A second phase will continue until October 2016, with the provision of water points within 100m of any shelter in Azraq, the treatment of waste water for reuse in agriculture, and the provision of access to sanitation facilities for those with restricted mobility.

Assem, a Syrian refugee and father of two, said that the quality of water and sanitation services in Azraq had improved.

“With water points closer to the shelters, the distance that people have to travel to collect water, time spent queuing, and the amount of water wasted during transport are all reduced. Improved sanitation means that there will be less septic waste over ground, which attracts flies and mosquitos and spreads disease.”

Since 2012, Ireland has responded to the Syrian crisis with €42.2 million in humanitarian aid, which includes funding to United Nations agencies, the Red Cross and International Non-Governmental Organisations, working both inside Syria and in neighbouring countries.

In 2015, Ireland provided €2.5 million to UNICEF to support its Syria response work: €1 million to UNCIEF’s regional appeal; €1 million to UNICEF’s No Lost Generation campaign, and €500,000 to Azraq camp in Jordan for WASH activities. Ireland has pledged €20 million in response to the Syria crisis in 2016, within Syria and in the neighbouring refugee-hosting countries.