Ireland responding to the crises in East Africa

Severe humanitarian crises are affecting a number of countries across East Africa – in large parts of Ethiopia, Somalia, Sudan, South Sudan and Kenya millions of people are living in dire circumstances. These crises are driven by drought and conflict, often resulting in large-scale displacement of people from their homes. Ireland is responding to the crises through our humanitarian assistance programme, managed by Irish Aid.

The situation is grim, and the suffering immense. Some of the worst affected areas in Ethiopia, Kenya and Somalia are yet to recover from the 2015-16 El Niño drought. Violent conflict continues in Sudan, South Sudan and Somalia, causing massive suffering in a region already weakened by the effects of severe and recurring drought. Record numbers are facing extreme hunger, many of whom are children.  The UN estimates that almost 30 million people are in need across the region. 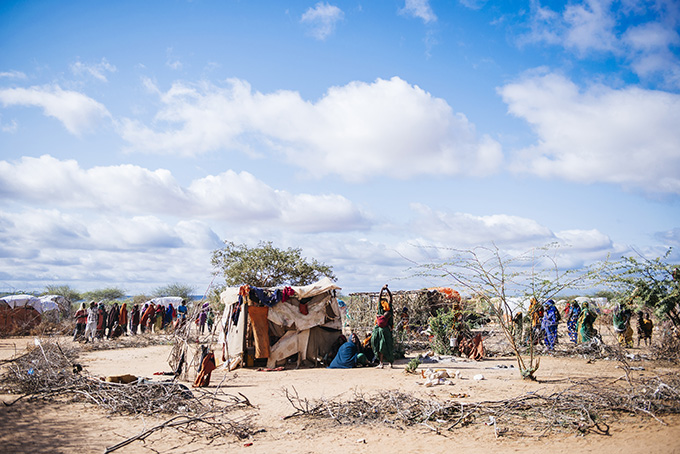 A new IDP camp at Dollow, Somalia, that is composed of new internally displaced people from Bay and Bakool - credit: Amunga Eshuchi/Trocaire

What is being done?

Ireland channels its funding through our UN and NGO partners on the ground. We contribute to UN Humanitarian Pooled Funds for Somalia, Sudan, South Sudan and Ethiopia, which allocate funding in-country to a broad range of partners, including UN organisations, and national and international NGOs. The Pooled Funds form part of the Humanitarian Response Plan for each country, and the funding is allocated to meet critical humanitarian needs ranging from food assistance, to protection, to livelihoods support. Other key UN partners for Ireland in the region are UNICEF and UNHCR. In 2017 for example, Ireland contributed €1 million to UNICEF's Humanitarian Action for Children Appeal for South Sudan, which has a particular focus on treating acute malnutrition.

A central feature of Ireland’s overseas humanitarian assistance programme is our Rapid Response Initiative, which includes the Rapid Response Corps. In 2016, Irish Aid deployed 6 Rapid Responders to the East Africa Region. So far this year, Ireland has airlifted emergency humanitarian stocks to Somalia, South Sudan and Uganda (for South Sudanese refugees). These emergency supplies are directed to meeting urgent needs of those caught in the crisis, for example, the airlift to Somalia contained over 100 tonnes of humanitarian relief supplies to support Internally Displaced People (IDPs) and drought-affected households. This airlift, worth over €600,000, included blankets, jerry cans, cooking sets, family hygiene kits, tarpaulins and solar lamps for distribution to 4,000 vulnerable families, recently displaced by drought and acute hunger, and now living in informal settlements.

Through our embassy network in East Africa, and engagement with our international humanitarian partners, we continue to monitor the situation, and endeavour to target Irish humanitarian assistance to where the need is greatest.

Gripped by drought and wracked by conflict for over twenty years, Somalia is one of the most challenging environments for humanitarian aid operations. It is also the most fragile state in the world. The situation continues to deteriorate with 6.7 million people now in need of humanitarian assistance, representing more than half of the population. So far in 2017, Ireland has provided almost €6 million in humanitarian assistance to our United Nations (UN) and Non-Governmental Organisations (NGOs) partners on the ground. This support is focused on saving lives, alleviating suffering, building resilience for women and children and increasing timely access to life saving health, nutrition and livelihood intervention for the Somali people. 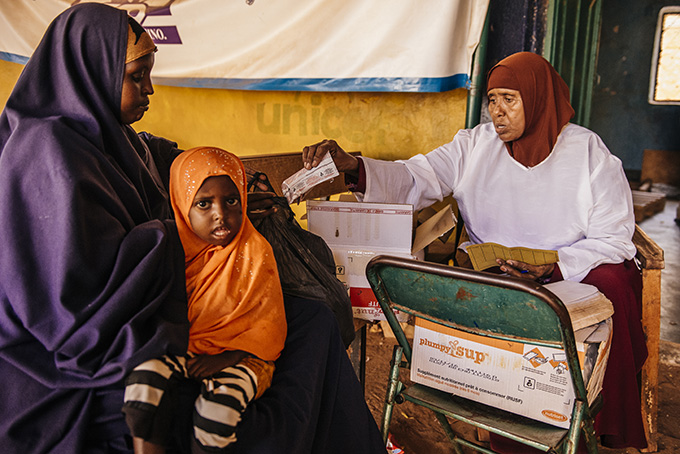 Idle Abdi Mohammed is given her weekly supply of Plumpy Sup for her daughter Zaynab by the nutritionist at Bula Hawa in Somalia. Credit: Amunga Eshuchi/Trocaire

South Sudan is also facing a severe, large-scale conflict-driven humanitarian crisis resulting in massive displacement. Over 6 million people are now in need of humanitarian assistance. With some 3.9 million people displaced, including 1.9 million people who have taken refuge in neighbouring countries, it is the largest refugee crisis in Africa. The levels of hunger and malnutrition are unprecedented. International humanitarian actors moved quickly in response to the famine, declared there in February this year, however a serious threat of new famine remains. In 2017, Ireland has contributed over €10 million in humanitarian assistance to our UN and NGO partners on the ground. Our funding has supported emergency responses for South Sudanese people seeking refuge in neighbouring countries such as the Democratic Republic of Congo and Uganda, as well as water, sanitation and hygiene and nutrition/food security projects for displaced people within South Sudan. 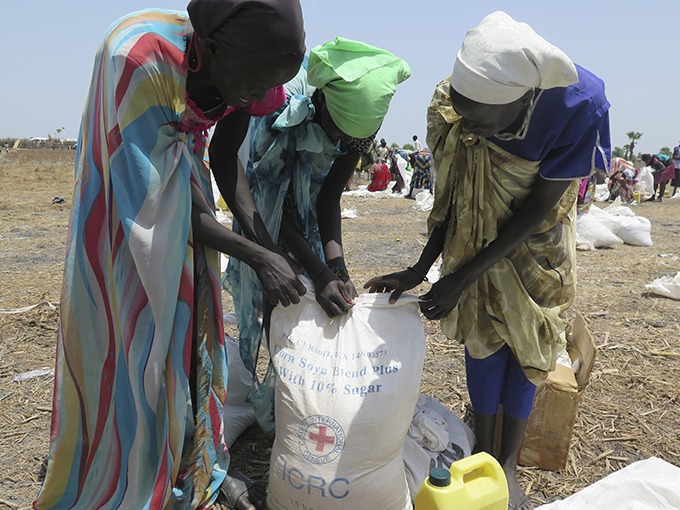 The longstanding humanitarian crisis in Sudan continues to drive displacement and food insecurity. Although the crisis is linked to years of conflict, El Niño-related drought and low rainfalls have contributed to a worsening of the situation. Some 4.8 million people are in need of humanitarian assistance, with many facing severe hunger. Sudan hosts over half a million refugees, mostly from South Sudan, placing pressure on local populations especially in the Darfur regions. Some 600,000 Sudanese have also fled to neighbouring countries due to armed conflict and violence. To date in 2017, Ireland has provided over €3.6 million in humanitarian funding to the crisis in Sudan. Assistance has been provided through our UN partners and two NGO partners, Trócaire and World Vision. Our funding to Trócaire is intended to help strengthen a network of outreach clinics for the treatment of malnutrition among women and children. Our partner World Vision is focused on building the resilience of women and children through education and protection programmes.

Ethiopia is experiencing its worst drought in 50 years. The northern, eastern and central parts of the country bore the brunt of negative El Nino weather conditions over the 2015-2016 period, with back-to-back seasons of poor rainfall. A new drought has now emerged in southern Ethiopia, as the country continues to struggle with the effects of previous drought. The number of people requiring humanitarian assistance in Ethiopia has increased dramatically between January and March this year, from 5.6 million to 7.8 million. So far in 2017, Ireland has contributed over €2.6 million to the Ethiopia crisis. Our support is helping Trócaire provide emergency nutrition and livelihood support to affected communities in one of the worst-affected regions of Ethiopia. Funding has also been provided to the International Rescue Committee (IRC) to support programmes on Gender Based Violence in emergencies for refugees and to the UN High Commission for Refugees (UNHCR) for its response to the needs of displaced persons and refugees.

Kenya also faces recurrent drought, flooding, malnutrition and food insecurity, compounded by disease outbreaks, Al Shabaab related violence and inter-communal conflict over water and land.  Drought conditions have worsened in eastern, coastal and north-eastern regions of the country. Food security is deteriorating due to widespread crop failures and loss of livestock. Over 3 million people are facing acute hunger, and this figure is expected to rise over the coming months due to the recent late and insufficient rains. So far in 2017, Ireland has contributed over €430,000 to the Kenya crisis. This includes funding to Christian Aid’s emergency drought response in North Horr, northern Kenya, and Trócaire’s emergency cash transfer intervention to the drought-related nutrition crisis in Turkana, also in northern Kenya. Our assistance is also supporting the International Rescue Committee’s work on the prevention of gender-based violence.

Ireland will continue to support efforts to respond to the humanitarian crises that are affecting large areas of East Africa. As the region continues to suffer the combined impacts of drought, hunger and conflict, Ireland will continue to work with other donor countries, and our UN, Red Cross, and NGO partners to assist the most vulnerable populations affected and alleviate suffering.