Ireland Pledges €30 million to the Global Fund to Fight AIDS, TB and Malaria 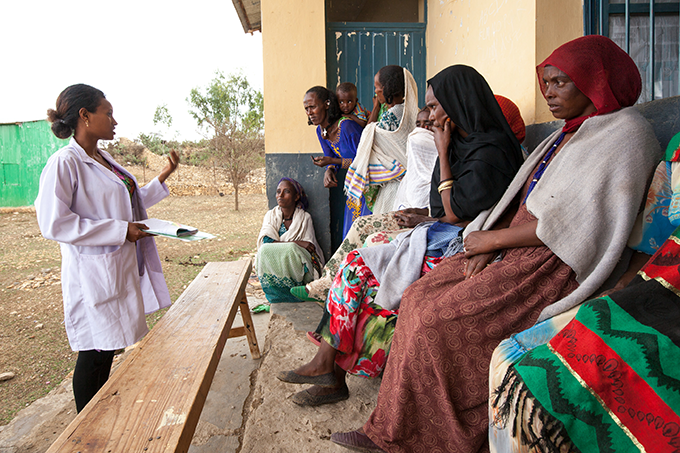 In Ethiopia, support for human resources in health involves a program of integrated training for 38,000 health extension workers. The program has resulted in significant improvements in maternal and child services. The rate of delivery assisted by skilled health personnel has tripled, increasing from 20 percent in 2000 to more than 60 percent in 2015. Malaria deaths fell by 80 percent between 2005 and 2015, and the number of TB deaths fall by 36 percent in the same period. Copyright notice: The Global Fund / Petterik Wiggers

In 2002, more than 4 million people a year worldwide died from three diseases- AIDS, Tuberculosis and Malaria. The Global Fund to Fight AIDS, TB, and Malaria was founded that year to combat these epidemics, and today there are one third fewer deaths from these diseases, and 20 million lives have been saved in countries where the Global Fund operates.

The Global Fund is a public private partnership between governments, civil society organisations, private organisations and the people most affected by these diseases, and it is the single largest source of financing in the fight against TB and Malaria.

Ireland was a founding member of the Global Fund in 2002, and since then we have contributed over €193 million to help end the epidemics of AIDS, TB and Malaria and build strong and resilient systems for health.

At the Fifth Replenishment of the Global Fund, held in Montreal in September 2016, Ireland pledged to support the Global Fund by €30 million over the next three years, continuing the support we have given over the past 14 years. A total of $13 billion was raised at the Replenishment, and $4.3 billion of this will go towards helping Ireland’s Key Partner Countries around the world.

In January 2017, Dr Mark Dybul, Executive Director of the Global Fund, will visit Ireland to reaffirm our joint commitment to ending the epidemics of AIDS, TB and Malaria. Dr Dybul will meet senior officials from the Department of Foreign Affairs and Trade, as well as holding a bilateral meeting with the Minister of State for the Diaspora and International Development, Joe McHugh TD.

Dr Dybul will also take part in a public event taking place in the Royal College of Surgeons in Ireland, to discuss the topic of Global Health and the Sustainable Development Goals, along with representatives from the World Health Organization and University College Dublin.

Ending these epidemics by 2030 will require sustained efforts from the global community, and Ireland is committed to playing its part in realising this ambition.