Ireland marking the International Day against Homophobia, Transphobia and Biphobia 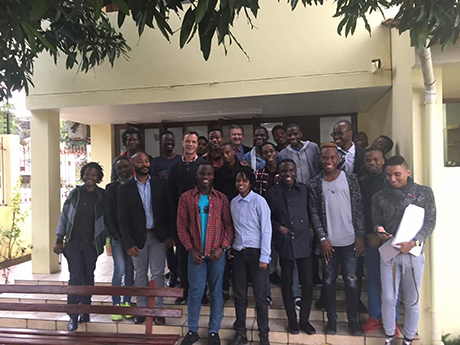 17th May is the International Day Against Homophobia, Transphobia and Biphobia [IDAHOT]. It’s an opportunity to celebrate global sexual and gender diversities and support all efforts to raise public awareness of issues affecting the lesbian, gay, bisexual, transgender and intersex community. Promoting the rights of LGBTI people is a key element of Ireland’s international human rights policy, which focuses on ensuring individual human rights and non-discrimination, regardless of the basis of sexual orientation and gender identity. Ireland continuously raises the issue of the protection and promotion of LGBTI rights in our bilateral engagements as well as multilaterally at the UN and in the EU. At the 27th session of the Universal Periodic Review on Human Rights in Geneva this year, Ireland raised the issue of discrimination on the grounds of sexual orientation and gender identity and the protection and promotion of the rights of LGBTI community at least 8 times.

Two years ago, the people of Ireland historically voted in favour of legalising same-sex marriage, and in doing so, Ireland became the first country in the world to legalise same-sex marriage by popular vote. The human rights of LGBTI community members are not respected in a number of countries, however, with 13 States around the world where particular sexual orientation or gender identity may be punished by death. In parts of the world where freedom to choose one’s sexual orientation and or one’s gender identity is celebrated, members of the LGBTI community still face discrimination, threats and sometimes attacks. Ireland will continue to support efforts to raise awareness of LGBTI issues and to protect the rights of LGBTI communities. This is part of our continued commitment to combating all forms of discrimination, and supporting the promotion and protection of the human rights of all persons, irrespective of their sexual orientation and gender identity.

Rory O'Neill/Panti Bliss speaking about his experience in Mozambique

The promotion and protection of human rights is also central to the work of Irish Aid, and this week we welcomed Rory O’Neill/Panti Bliss to our Embassies in Mozambique and South Africa as part of a programme of events to promote the rights of LGBTI people and mark IDAHOT. Rory/Panti is a figurehead of the LGBTI community in Ireland, and the visit was an opportunity to support local activists in South Africa supporting LGBTI rights and view first-hand the work on HIV/AIDS that Irish Aid is funding.

Since opening in 1994, the Embassy of Ireland in South Africa has worked to build a better understanding of the value of individuals and individuality, including persons living with HIV and Aids, and fight against the stigma and the challenges these individuals can face in gaining acceptance in society. Our new strategy for South Africa, which will be published this year, includes provisions to support gender-based violence survivors and strengthening opposition to GBV, and improve the capacity of civil society to promote good governance and human rights for all. In Mozambique, our support for the Clinton Health Access Initiative helps to provide treatment to people living with HIV and AIDS. Doctors at the clinic in these pictures can see over 200 patients a day and support them with the treatment they need, thanks to this work carried out by our partner.

Elsewhere in the world, our Embassies have been equally active. On 16 May, the Irish Embassy in Beijing hosted an interactive panel discussion called “Changing Perspectives: Being LGBT+ in China”, moderated by Irish Times journalist Clifford Coonan. Our Embassies in Athens and in Paris will be represented in the Pride Parades occurring respectively on 10 June and 24 June, while our Embassy in Romania signed up to a statement conveying our support to the LGBTI communities in Romania. Finally, our Embassies in Tokyo and Seoul have distributed hundreds of Rainbow Pride flyers to show their solidarity with LGBTI communities.