Ireland and Kenya: an evolving relationship

Minister Coveney’s visit to Kenya, and the formal opening of the Irish Embassy in Nairobi, is a chance to reflect on the evolution of Ireland-Kenya relations. Ireland and Kenya have had strong personal connections for the past century, as shown in the travelling exhibition of ‘100 years – the Irish in Kenya’. Building on our strong relationships, Ireland and Kenya are exploring further potential to partner together, including on promoting closer trade links. 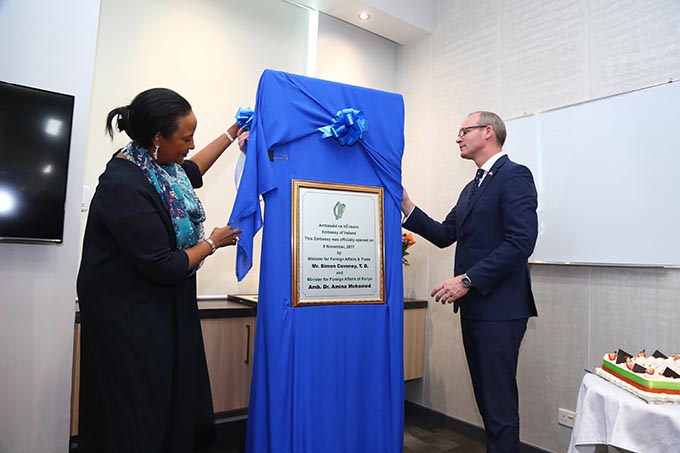 Kenya is an economic powerhouse in East Africa and the country has one of the fastest-growing economies on the continent. A number of Irish businesses are working with local counterparts and explore the opportunities that exist in a dynamic business environment.  There are opportunities for Irish organisations in the agri-food, international education, healthcare and ICT sectors, and the Embassy and Enterprise Ireland are working together with businesses to explore opportunities to create local employment and drive economic growth in Ireland and Kenya. 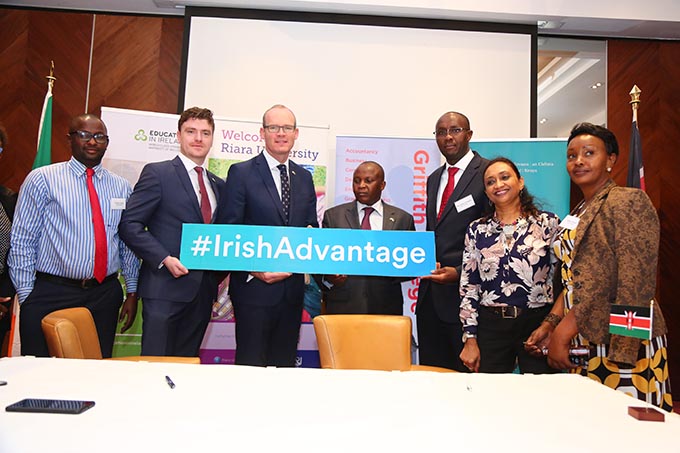 Minister Coveney with representatives of Riara University and Griffith College

Today, Minister Coveney met with representatives of Kenyan and Irish business representatives to discuss how trade links in the sectors mentioned above could be increased. In Nairobi, the Minister was present to witness the fruition of previous trade promotion work as a number of companies and institutions signed agreements in various sectors, ranging from potato production to higher education and from computing skills to medical technology. These agreements will enable Irish expertise in these fields to benefit Kenyan companies and, in turn, drive bilateral trade. Reacting to the trade deals and his experience in Kenya, Minister Coveney said,

“I am very impressed by Kenya’s economic progress and its role as an economic powerhouse for the region. The country has transformed from largely agrarian into one of the most diversified and innovative markets with a thriving technology sector. The parallels with Ireland are striking.” 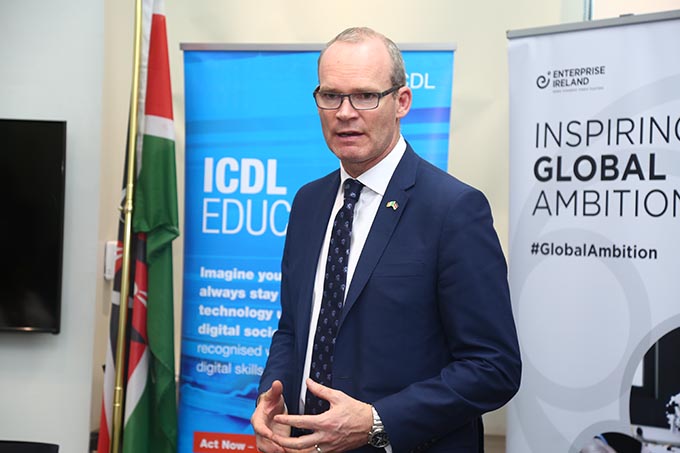 In light of the many efforts to increase trade links between the two countries, Minister Coveney launched the ‘Our Shared Interest - the Ireland Kenya Agri-Food Strategy 2017-2021’. Recognising the importance of the farming and fisheries industries to the economies and societies of both countries, the strategy seeks to strengthen support for the Kenyan agri-food sector and expand opportunities for Irish agri-food companies. Investing in agriculture in Kenya is critical to reduce poverty and create decent employment opportunities and the strategy seeks to support Irish companies to play a role in improving the agricultural output of Kenyan farmers.

Social, cultural and trade links between Ireland and Kenya continue to multiply, in no small part due to the presence of an Irish Embassy in Nairobi and a Kenyan Embassy in Dublin. The Embassy of Ireland to Kenya in Nairobi began operating in 2014, and Minister Coveney today officially opened the Embassy with his Kenyan counterpart, Cabinet Secretary for Foreign Affairs and International Trade, Amb. Dr. Amina Mohamed.

The two Foreign Ministers also held a bilateral discussion where they discussed regional peace and security in the Horn of Africa and Great Lakes regions; EU-Africa relations, including the upcoming AU-EU Summit taking place in Abidjan at the end of November 2017; and opportunities presented by the opening of the Embassy to deepen political, economic and cultural links between Ireland and Kenya.