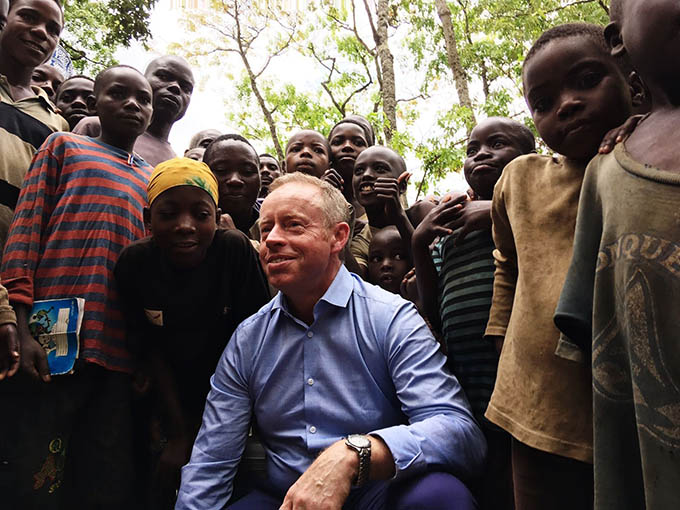 On Monday, Minister Ciaran Cannon visited Nduta refugee camp in Tanzania.  Irish Aid provides support to partner organisations to deliver healthcare, water, and education services for the 123,000 refugees from Burundi and the Democratic Republic of Congo who call Nduta their home.

As part of Ireland’s €2.5m over two years to support Refugees in Tanzania, Ireland provided €1.5m to the United Nations Refugee Agency (UNHCR) to build a school and extend primary healthcare services in 2016/17 and a further €500,000 was allocated to World Food Programme (WFP) for food rations.  Oxfam received support to provide water and sanitation in the camp.  While in Nduta, Minister Cannon had the opportunity to engage with the children in the camp and join them in a French class. 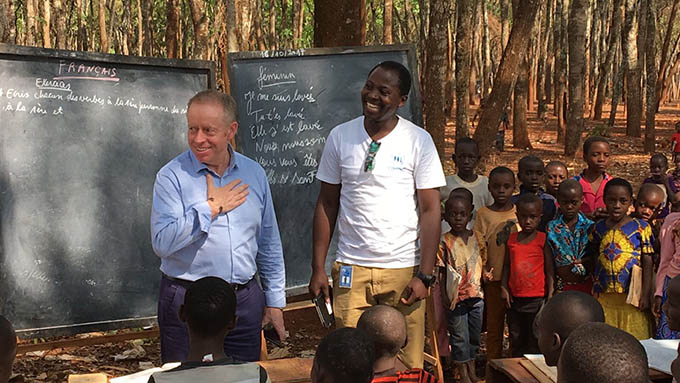 On Tuesday, Minister Cannon was briefed on the Productive Social Safety Net programme which increases the income of the poorest. He visited a community based health care centre in Misasi and launched the Kivulini Gender Based Violence programme.  During his visit Minister Cannon will also launch Africa Code Week in Tanzania.  Africa Code Week aims to engage teenagers and young adults in learning about software coding. The Minister will also meet with civil society and government leaders as part of his four day visit to Tanzania.

On Day 3 of Minister Cannon’s visit to Tanzania, the Minister brushed up his coding skills at the National Library while attending an event organised by Apps and Girls.  Apps and Girls is a partner of Africa Code Week which is an initiative the Minister will officially launch this evening.  Ireland, through its programme in Tanzania, is focused on supporting women and girls to gain access to opportunities.

At the Apps and Girls event, the Minister met youth who were participating in one of the many events organised as part of Africa Code Week.  Two of the participants, Elham and Doreen (pictured) got involved through coding clubs at their schools. Elham, who has been involved with Apps and Girls for 4 years, said that "Coding has been a door to a whole new world. You can do anything with technology. Being involved in Apps and Girls has really built my self-esteem and made me a role model that others look up to." 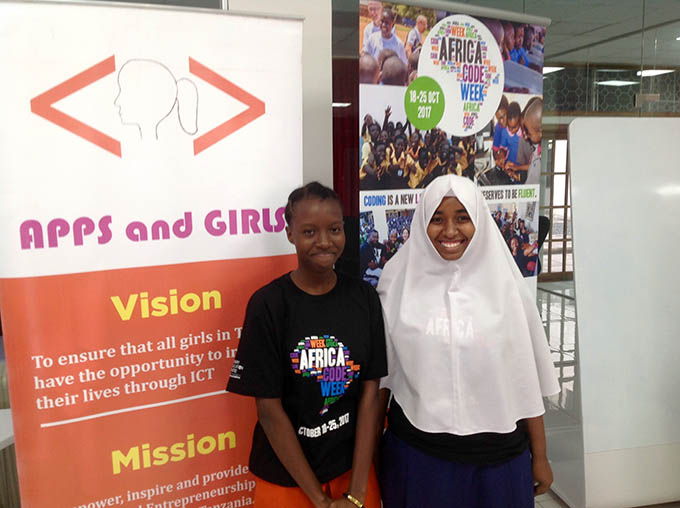 Doreen, who has participated for two years in the programme, pointed out the opportunities open to her as a result of learning to code:  "Through Apps and Girls I can reach my dreams. I want to be an astronaut and I know coding and ICT gives me more exposure to realise this dream. Who knows where I will be in 10 years because of Apps and Girls."

As a country, Ireland has greatly benefited from the digital economy and recognises that the jobs of the future will require digital literacy.  This is no less the case for growth in African countries, including Tanzania.   As part of Irish Aid’s commitment to local, inclusive, and long term development, we are building links with the innovation and start up sector in Tanzania.

Later today Minister Cannon will visit Tanzania’s first innovation space, Buni Hub which offers four programmes targeted at Tanzanian youth: an Internship program; a mentoring program (Pre-Incubation Program); a communities program and a fabrication laboratory.  Afterwards he will call in to Mwananchi Communications Ltd which benefits from an Irish Aid grant via the Tanzanian Media Foundation which promotes investigative and public interest journalism.

For more information on Apps and Girls and Africa Code Week please see:

The last day of Minister Cannon’s visit to Tanzania focused on the people-to-people links between our two countries.  Writing in The Citizen, a leading daily newspaper in Tanzania, the Minister highlighted the similarities between Ireland and Tanzania:

“People from our two countries, Ireland and Tanzania, began building strong personal relationships long before either of our countries gained independence.  Relationships founded in a shared love of education, of the land, family, humour- and our respective journeys from colonial pasts to our sovereign presents.  Our countries are bound closely together.”

Over the course of his visit, the Minister met many Irish citizens, who work in a number of areas.  On Wednesday evening, at the launch of Africa Code Week, he discussed support to education in Tanzania with Sr Annette Farrell, an Irish nun, originally from Co. Offaly, who is working at the Debrabant High School in Dar es Salaam. Debrabant pupils received training through Africa Code Week. 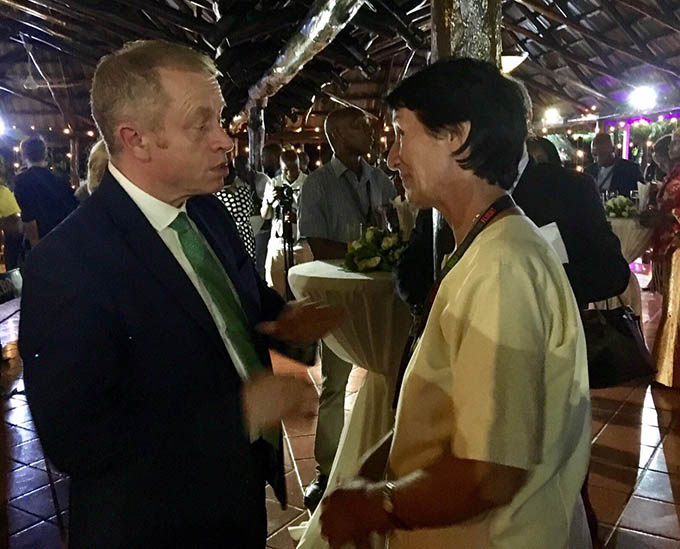 On Thursday morning he met business leaders at a breakfast event to hear of their experience of the growing trade and commercial links between Ireland and Tanzania, later in the day he visited Camara education hub.  Irish Aid has provided over €2.3 million to Camara since 2006.  Camara Education was founded in 2005 to improve educational outcomes by integrating ICT into mainstream tuition.  It operates as a social enterprise and thus generates a significant proportion of its own revenue.

In the afternoon he visited Comprehensive Community Based Rehabilitation in Tanzania (CCBRT) a healthcare facility which provides services to children under five who suffer from cataracts and cleft palates.  Irish Aid, which has funded the centre for over ten years, contributed €500,000 this year.

In the evening the Minister attended a reception for the Irish community in Tanzania.  At the event, Seamus Cashman, an Irish poet who taught English in a school in rural Tanzania from 1965-67 read some of his poetry.  It was a long held-dream of his to return to Tanzania and reconnect with people and communities he knew.  He said of the visit:

"I recently wrote a phrase in a poem:

Can summon up at will

And my return to this wonderful country after 50 years has not only reinforced old memories such as this one, but also given me the pleasure and, in fact joy, of meeting a number of my former students; experiencing the strong character of the current Likonde students, among whom there are a number of young men with real poetic potential; and the honour of running a workshop with Tanzania poets in Dar es Salaam." 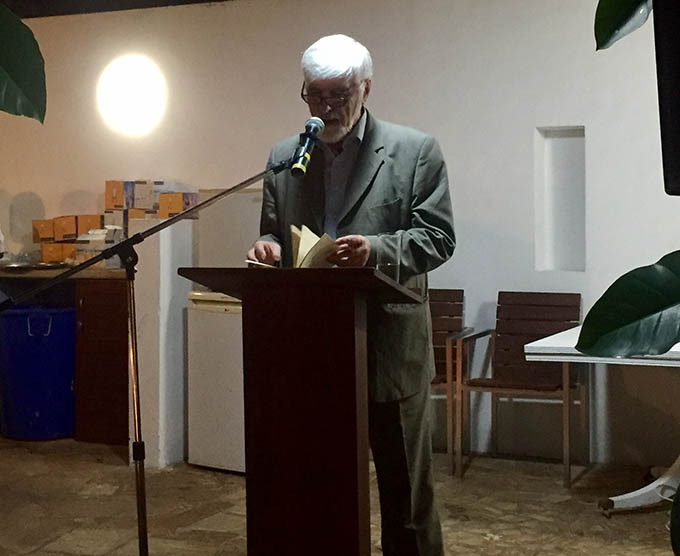 On Tuesday, the Irish Embassy supported a workshop, led by Seamus, on creative writing for emerging Tanzanian poets and are organising a poetry event next week.