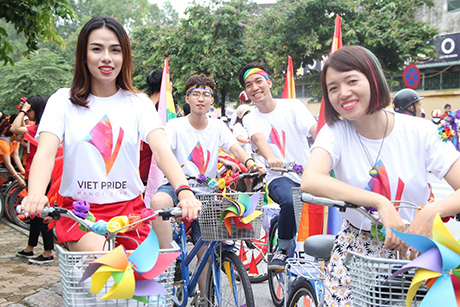 Viet Pride 2017 is the biggest festival of the LGBTI community in Vietnam. (Image courtesy of Viet Pride/Hanoi Pride)

Rory O’Neill/Panti Bliss will travel to Vietnam on 20-26 September to attend the Pride Festival in Hanoi and will be a guest speaker at two Public Talks – “How the Yes was won: The Story of Ireland’ which will take place in Hanoi as part of the Viet Pride Festival; and a Public Talk – ‘Diversity in the Workplace’ which will take place in Ho Chi Minh City.

Viet Pride 2017 is the biggest festival of the LGBTI community in Vietnam and will be celebrated this year in 34 cities/provinces across the country with the two main Pride parades in Hanoi and Ho Chi Minh City. Panti Bliss will take part in the Pride events in Hanoi which will consist of a bicycle rally through the streets, a walking march and a Pride festival. Panti will have the opportunity to speak with the LGBTI community and explore issues facing them in Vietnam.

Vietnam was hailed as a leader on gay rights in Southeast Asia after the government abolished a ban on same-sex marriage in 2015. However, discrimination and bullying still afflict LGBTI youth in the country.

Equality and respect for human rights are key values of Ireland both at home and abroad, and remain at the heart of the work of Irish Aid and the Department of Foreign Affairs and Trade. Vietnam is one of Ireland’s key partner countries receiving support through the Irish Aid programme. As part of Irish Aid’s Civil Society support programme, Ireland has been supporting a number of initiatives to facilitate the realisation of rights of the LGBTI community in Vietnam.

In September 2015 a delegation of Irish Aid's partner civil society organisations [CSOs] (iSEE, CECEM, and ICS) visited Ireland to learn from the experience and lessons of the YES Equality campaign and the LGBTI movement in Ireland. With support from Irish Aid, iSEE and ICS brought the YES Equality's messages and stories into a series of workshops in a number of cities and provinces in Vietnam to share their experience and understanding of the YES Equality campaign with civic organisations and social activists in Vietnam.

In 2017 Ireland is supporting a local organisation called ICS based in Ho Chi Minh City (an organisation focused on empowering Vietnamese LGBTI people to live positively and to advocate for and defend their rights). The ICS project supported by Irish Aid aims to strengthen capacity for LGBTI groups/organisations and Parents, Families and Friends of Lesbians and Gays (PFLAG) chapters, with a focus on those at sub-national levels. The project enables participating groups in 11 provinces to expand their presence and membership as well as engage better in advocacy at national and provincial levels.

Earlier in 2017 Rory/Panti visited the Irish Embassies in Mozambique and South Africa, and explored some of the work being done in two of Irish Aid’s priority areas: promotion and protection of human rights and HIV/AIDS prevention and treatment. Rory described the visit as

“Inspiring, exhausting, eye-opening, interesting, emotional, and wonderful. I've met so many amazing, brave and inspiring people. And Ireland has much to be proud of. Lots of fantastic Irish people doing wonderful work, and Irish international aid money being put to fantastic use in areas like HIV/AIDS, gender based violence, LGBTI equality, and so much more. I feel privileged to be able to see the work being done and to meet the people, both local and Irish, doing the work.”