Tánaiste announces funding of €1million for Syrian refugees in Turkey 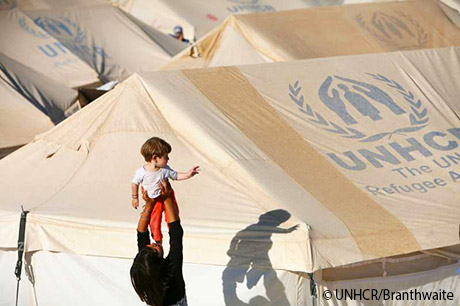 The number of Syrians crossing into Turkey has surged by 28% since January, leaving the Turkish Government and aid agencies struggling to cope.

The Tánaiste and Minister for Foreign Affairs and Trade, Eamon Gilmore T.D., has announced additional aid of €1 million to help Syrian refugees in Turkey.

The Tánaiste, who is currently leading a four-day trade mission to Turkey, this morning visited a camp for those fleeing the violence in Syria near the Turkish-Syrian border.

Over 400,000 Syrians have crossed the border into Turkey to escape the unrelenting violence of the Assad regime that has killed more than 70,000 people over the past two years.

The number of Syrians crossing into Turkey has surged by 28% since January, leaving the Turkish Government and aid agencies struggling to cope with the increase in demand for assistance.

Today's additional contribution of €500,000 each to the International Federation of the Red Cross and the UN’s refugee agency, UNHCR, brings Ireland’s total response to the humanitarian crisis in Syria to €8.15million.

Speaking in Nizip, the Tánaiste said he wanted to demonstrate Ireland's support for the generous humanitarian response of the Turkish Government in providing for these people:

“The widespread and indiscriminate violence inside Syria has forced well over a million people to take refuge in neighbouring countries while another four million people who remain in Syria are in urgent need of humanitarian assistance.

Without the responsible, principled and charitable actions of neighbouring countries, the suffering of Syria’s traumatised civilians would be even greater. When I met with Foreign Minister Davutoglu yesterday I told him that Ireland recognises Turkey’s generosity at this time of great tragedy for the Syrian people, and I urged him to maintain Turkey's open-door policy.

With the dramatic increase in the numbers of Syrians seeking refuge in Turkey in recent months, supporting the country in its humanitarian efforts is crucial if the critical needs of Syrians are to be met.”

The Tánaiste also reiterated Ireland’s strong support for international efforts to respond to the crisis.

He will travel to Ankara later today for a series of high-level political meetings with Enterprise Ireland client companies and other trade-related events.

Notes to the editor:

·                     Ireland’s total contribution to the Syrian crisis response will stand at €8,150,000 following today’s announcement of €500,000 each to the International Federation of the Red Cross (IFRC) and the UN’s refugee agency, UNHCR. Part of this total includes Ireland’s pledge of €4,700,000 made at the High Level Donor Pledging Conference for Syria in Kuwait City on 30 January 2013 attended by Minister of State for Trade and Development, Joe Costello, T.D. which has already been met in full.

·                     Since the uprising in Syria began in March 2011 some 70,000 people have been killed in the violence. The most urgent humanitarian needs inside the country are protection, health care, shelter, food and water and sanitation.

·                     Irish Aid is the Government’s overseas development programme. It is managed by the Development Cooperation Division of the Department of Foreign Affairs and Trade.