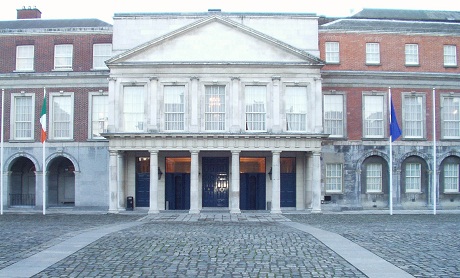 Up to €250 million in EU funding will be made available in 2013 to support Mali to restore democracy and peace and to ensure access to nutritious food, clean water and sanitation

Up to €250 million in EU funding will be made available in 2013 to support Mali to restore democracy and peace and to ensure that vulnerable communities can access nutritious food, clean water and  sanitation.

Welcoming the decision, Minister for Trade and Development Joe Costello, who chaired today's meeting under Ireland’s Presidency of the Council of the EU said: “The EU has provided €116 million in humanitarian aid to to meet the Malian people's most urgent needs for food, shelter and security since the start of 2012.

“However, today's announcement that we are resuming long-term assistance to Mali underlines the EU's commitment to supporting the Malian people during the challenging years ahead as they work to rebuild their country and their future.

“We will focus on supporting Mali on its journey to peace and democracy and on assisting the thousands of families displaced by recent conflict to access the food, nutrition and basic services they need. Under this ambitious response plan, the EU will fund programmes to prevent conflict, facilitate reconciliation and prepare for the elections which are due to be held by July under the transition roadmap adopted by the Malian authorities. We will also provide vital water and sanitation facilities and nutrition programmes, in addition to bringing forward new proposals to help relaunch the economy.”

EU Commissioner for Development, Andris Piebalgs told EU Development Ministers today that the swift adoption by the Malian authorities of the political transition roadmap opened the door for the resumption of development aid, which was suspended as a precautionary measure last March, following a coup in Mali's capital, Bamako.  Commissioner for Humanitarian Aid and Crisis Response, Kristalina Georgieva also reported on her recent visit to Mali.

Their discussion today was framed by the report of an EU Needs Assessment Mission, setting out the most pressing needs of Mali’s people and examining how the EU can best support the country’s transition to peace and development over the coming years.

Also on the agenda for the two-day meeting was a detailed discussion on the EU’s engagement in the development of a new set of international targets for human development after the deadline for the Millennium Development Goals (MDGs) in 2015.  Ministers were joined by former President of Ireland, Mary Robinson and the UN Secretary General’s special adviser, Amina Mohammed for this discussion.

At the meeting, Ministers agreed that the EU will adopt a unified approach to the international negotiations designed to build global consensus around this ambitious new framework to guide  development efforts after 2015.  They emphasised the need to agree a common set of targets which build on the progress of the MDGs and address the global challenge of environmental sustainability. They agreed that the principal goal will be the elimination of extreme poverty in the world within a generation.

Minister Costello said: ‘Ensuring a unified EU position to the negotiations to agree a new global development framework is one of the major priorities of the Irish Presidency.   This issue will be at the top of the international agenda for the next two years and I am delighted that European Development Ministers today agreed to seek to achieve agreement on one set of development targets after 2015, which incorporate environmental sustainability. For the first time, we were joined by EU Environment Commissioner, Janez Potocnik, emphasising the coherence and integrity of the EU's approach. Our aim is to eliminate extreme poverty within one generation. We believe we now have a historic opportunity to achieve this goal.”

Also at today’s meeting, Commissioner for Development, Andris Piebalgs made a presentation on official development assistance (ODA) targets in the context of the agreement reached at last week’s European Council on the EU Multiannual Financial Framework (MFF), which increased funding for development and humanitarian aid over the period 2014 to 2020.

Minister Costello said: “The outcome of the MFF negotiations ensures the EU will remain the largest provider of overseas assistance this decade. This is hugely positive for the hundreds of millions of our fellow citizens who live in poverty and hunger and are in need of our assistance.

“It also confers great responsibility on us to use these resources to respond to humanitarian crises and provide development assistance in the most effective and targeted way. As EU Council Presidency, Ireland will take these negotiations forward with the European Parliament. We will work tirelessly to ensure a successful outcome.”

Development Ministers and Commissioners Georgieva and Piebalgs also discussed the complex crisis in the Horn of Africa, where years of chronic poverty, drought and armed conflict have left millions of people living on the brink of survival.  The most recent food crisis of 2011 and 2012 affected over 13 million people across eight countries. Ministers and Commissioners discussed the pressing need for long-term solutions to support vulnerable communities build up their resilience to shocks such as drought or disaster.

Minister Costello said: “Preparing for and preventing disasters not only saves lives and prevents suffering, but is much more cost effective than responding after the event.  Greater investment in measures to increase communities’ resilience to crises – such as early warning systems, drought resistant seeds; improved irrigation and social protection programmes  –will ensure they are better able to anticipate, manage and recover from crisis in the future.

“We know that this approach works: in Ethiopia, famine was avoided in 2011 because of the social safety net programme and disaster management systems set up by the Ethiopian government and supported by donors including Ireland and other EU member states. Today we agreed that we will increase our efforts to build up vulnerable communities’ resilience to disaster by better linking our long-term development and humanitarian work over the years ahead.”

For the agenda and media opportunities of this event, please see the Presidency website: