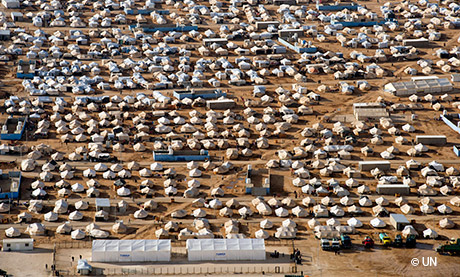 Since the uprising in Syria began in March 2011 more than 60,000 people have been killed according to the Office of the High Commissioner for Human Rights

The Tánaiste and Minister for Foreign Affairs and Trade, Eamon Gilmore T.D. and the Minister of State for Trade and Development, Joe Costello T.D., have approved an additional €4.7 million in Irish Aid funding and emergency supplies to help meet the urgent needs of the civilian population in Syria.  These include over 700,000 refugees in what the UN has described as “an unrelenting flow” of people seeking to escape the escalating violence inside the country.

Minister Costello made the announcement at a major humanitarian pledging conference for Syria which is being chaired by UN Secretary General, Ban Ki-moon and hosted by the Government of Kuwait.  The Conference is aimed at raising $1.5 billion in aid to assist over 4 million people in need amid a deteriorating situation and a particularly harsh winter in the region.  The Conference will be told how a serious funding shortfall is affecting the ability of the aid agencies to deliver vital assistance, including food, water, sanitation and medical supplies.

The funding from Irish Aid will be provided to international agencies on the ground including the United Nations High Commissioner for Refugees (UNHCR), the United Nations Childrens Fund (UNICEF) and Office for the Coordination of Humanitarian Affairs (OCHA) as well as the International Committee of the Red Cross (ICRC).  The aid will provide life-saving humanitarian supplies, as well as health and education assistance to thousands of the most vulnerable Syrians, including refugees and internally displaced persons.

“This funding underlines Ireland’s commitment to the urgent humanitarian needs in Syria and in neighbouring countries.  Ireland’s contribution of €4.7m will help alleviate the terrible suffering of the Syrian people. It brings the total value of the Irish Government’s response to the crisis in Syria to €7.1 million. During my visit to the Za’atari refugee camp in Jordan last year I was struck by the gravity of the situation and by the overwhelming generosity of Syria’s neighbours who now host more than 700,000 refugees.

“Ireland has sent a clear message today regarding its commitment to and solidarity with the Syrian people. On Thursday I will take this forward politically at the meeting of the European Foreign Affairs Council in Brussels.

While alleviating the humanitarian situation is our immediate priority, we must also do all that we can to reach a political solution. Without this the humanitarian situation will continue to deteriorate. When I met with the UN special representative for Syria, Lakhdar Brahimi, in Dublin last December I assured him of Ireland’s full support and commitment to those efforts.  As current EU Presidency, Ireland will work closely with our partners and at the UN to achieve this.”