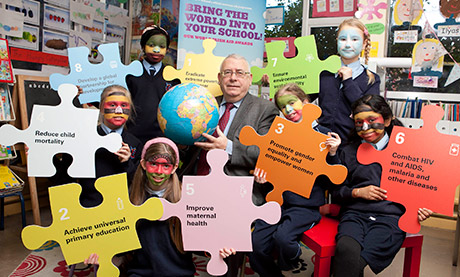 Minister Costello with pupils from George’s Hill National School, Dublin at the launch of the Our World Irish Aid Awards 2013.

The awards encourage primary school children to learn more about the lives of children in the developing world and to use their knowledge to create projects from art, drama and essays to poetry, film and music. The awards foster a greater understanding of the UN’s Millennium Development Goals (MDGs) and Irish Aid’s work in developing countries.

The theme for this year’s awards is Education for all the World’s Children. Ensuring that by 2015 all children complete a full course of primary schooling is the second Millennium Development Goal.

“Remarkable progress has been made in improving access to education worldwide. In the countries where Irish Aid works there has been a five-fold increase in enrolment since the mid-nineties.  Ireland has contributed to this remarkable success.

“But we must remember that 61 million children globally are not in school, the majority of whom are from poorer families and minority groups.  We know that education is central to unlocking a child’s potential and to ensuring that they grow up healthy and can build a bright future for themselves and their families. It is for this reason that Irish Aid prioritises support to education.

“I am encouraging pupils from all over Ireland to use their imaginations, to think of the importance of education in their own lives and those of children in the developing world. I am very much looking forward to seeing the projects, which I have no doubt will be informative and imaginative.”

More than 500 schools entered the awards in 2012 and this year’s awards are open to all pupils in third to sixth class (years four to seven in Northern Ireland).  The closing date for entries is Friday March 8, 2013 and a shortlist of schools will be announced in April.

•  Irish Aid is the Government’s programme for overseas development. It managed by the Development Cooperation Division of the Department of Foreign Affairs and Trade.

•   At the core of the Our World Irish Aid Awards are the eight Millennium Development Goals, which were agreed in September 2000 by 189 countries of the United Nations, including Ireland.

•    The theme of this year’s Awards is “Education for the All the World’s Children”, and young people are invited to explore the links between education (Goal 2)and global poverty and hunger (Goal 1)