Potential of trade and investment to drive progress highlighted at OECD 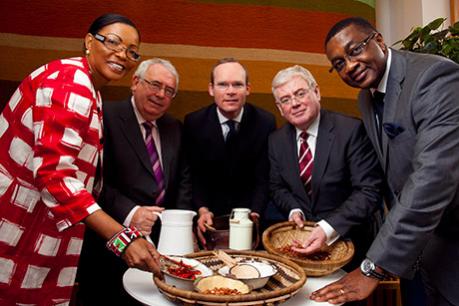 Minister for Trade and Development, Joe Costello, TD, highlighted the role of trade and investment in tackling global poverty during a keynote address to the Organisation for Economic Cooperation and Development (OECD) in Paris today.

Minister Costello said that the consistent message he receives from African Governments and businesspeople is that Africa is open for business. However, he noted that many developing countries still face significant challenges in building their capacity to trade.

“Developing countries are changing – stronger economies, better education and technology are driving political and economic change. But lasting solutions need to be underpinned by increased economic activity within developing countries, which will lead to improved tax collection, foreign direct investment, greater integration into world markets and more two-way trade with the rest of the world.”

Minister Costello highlighted Irish Aid’s support to addressing the challenges faced by developing countries in building their capacity to trade with the world:

“Ireland supports our developing partners in Africa and Asia to increase their capacity to trade with the world.  For example, we fund the United Nations’ Port Training Programme in Ghana, Namibia and Tanzania in Africa, and Indonesia, Malaysia and the Maldives in Asia.  This programme harnesses the expertise of Dublin Port Authority, the Port of Cork and Belfast Harbour Commissioners to increase the capacity of these strategic African ports.

“Ireland also recognises the potential of the private sector to advance the aid for trade agenda.  As part of the Department of Foreign Affairs and Trade’s Africa Strategy, Irish Aid is increasingly working to improve business environments in developing countries. One example of this is the Africa Agri-Food Development Fund, a joint initiative with the Department of Agriculture, Food and the Marine.