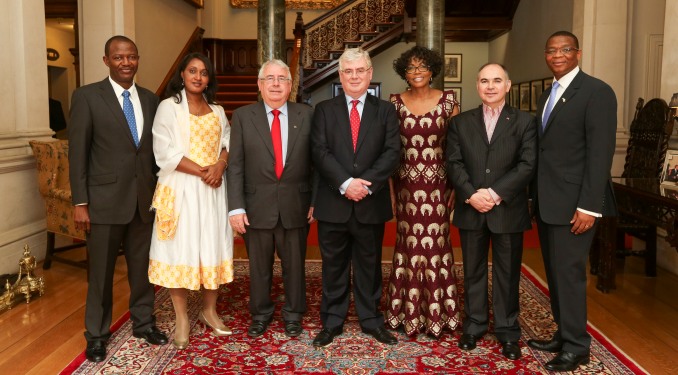 The Tánaiste and Minister for Foreign Affairs and Trade, Eamon Gilmore T.D., together with the Minister for Trade and Development, Joe Costello T.D., today welcomed thousands of people to Farmleigh Estate in Dublin’s Phoenix Park to celebrate Ireland’s sixth annual Africa Day.

Africa Day falls on May 25 each year and is celebrated internationally to mark African diversity and success, and the cultural and economic potential of the continent.

Family fun days, cultural performances, public lectures, trade-focused events and sports activities are among the events being held in Dublin, Limerick, Waterford, Cork and Galway to celebrate Africa Day 2013. The programme is supported by the Department of Foreign Affairs and Trade through Irish Aid.

At Farmleigh today, thousands of people are enjoying a showcase of African music, food and culture, with performances across two stages, a kids’ zone, sports activities and a speakers’ corner where debates on Ireland’s changing relationship with Africa and the African Union are taking place.

Speaking at the event, the Tánaiste said:

“Africa Day is a wonderful opportunity to celebrate our enduring ties with Africa, and the exciting changes taking place across this dynamic continent. Africa still faces many challenges, but is making remarkable progress. Today, 40 million more children are in school than a decade ago, and the rate of HIV infection has fallen by up to three-quarters.

“Africans are trading more both within the continent and with the rest of the world. Economic growth is expected to surpass 5 percent each year to 2015 and a new Africa middle class is emerging. And, crucially, there are more African countries at peace and building democratic institutions than ever before.

“Africa Day celebrations this week are a great opportunity for Irish and African communities to celebrate African cultures and traditions and to reflect upon our maturing relationship, which is increasingly focused on politics, democracy and trade.”

“Ireland has forged strong and enduring connections with Africa over many decades through the work of Irish missionaries and aid workers. More recently, many African people have made Ireland their home, contributing so much to our communities, our culture and our economy.

“We are also seeing a welcome increase in our trade and business links. There is much to celebrate today on the 50th anniversary of the African Union.

“I would like to thank all of those who have given time and energy to organising this exciting programme of events, particularly the African Embassies and communities, and the local authorities in Dublin, Cork, Limerick, Galway and Waterford who have provided strong support.”

A full programme of Africa Day events is available at http://africaday.ie