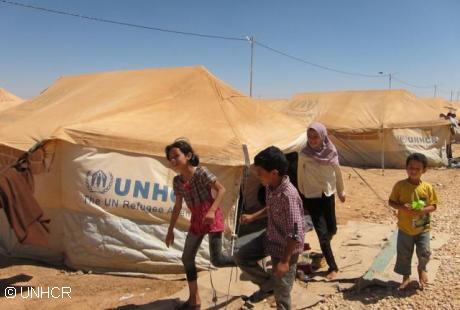 "Ireland is committed to helping UNHCR and UNICEF provide them with basic services in the refugee camps."

Minister for Trade and Development Joe Costello T.D., today announced a further €1 million in humanitarian assistance for refugees fleeing from the crisis in Syria. This funding will support UNHCR and UNICEF to provide food, water, sanitation, protection and shelter to refugees. Commenting on this latest funding the Minister said:

“The recent announcement that one million Syrian children are now refugees is yet another stark reminder of the immense human suffering caused by this horrific civil war. To put this statistic into context, in Ireland this figure equates to almost every child under the age of eighteen being forced to flee their homes. These children have suffered terrible trauma and lost their homes. In addition, this generation of Syrian children is losing out on a normal education due to displacement. Ireland is committed to helping UNHCR and UNICEF provide them with basic services in the refugee camps.”

According to figures announced yesterday by UNHCR, the total number of people displaced by the conflict, both inside and outside of Syria, has now reached 7 million – one third of the Syria’s population. With almost two million refugees across the region, host countries, such as Jordan, Turkey, Iraq and Lebanon, are also under great pressure as Syrians continue to flee in great numbers. Highlighting the impact of this crisis across the region, Minister Costello added:

“Countries in the region have shown great generosity in taking in large numbers of Syrian refugees, but are under immense strain as a result. The assistance announced today will benefit both those fleeing the conflict in Syria and the communities who have shown such great solidarity towards them. ”

This latest contribution brings Ireland’s total support in response to the enormous needs in Syria and neighbouring countries to almost €11 million.

Tánaiste and Minister for Foreign Affairs and Trade, Eamon Gilmore, T.D., will discuss the crisis at a meeting of EU Foreign Ministers on 6/7 September in Vilnius. US Secretary of State John Kerry will also attend. Ireland fully supports efforts to reach a political solution to the Syrian crisis.

•         Irish Aid is the Government’s overseas development programme. It is managed by the Development Cooperation Division of the Department of Foreign Affairs and Trade.

•         Since the uprising in Syria began in March 2011, it is estimated that over 100,000 people have been killed. The most urgent humanitarian needs are protection, health care, shelter, food and water and sanitation.  The number of registered refugees and individuals awaiting registration as a result of the crisis currently stands at almost 2 million, of which 1 million are children. The majority of refugees are in Lebanon (703,198), Jordan (523,059) and Turkey (440,773), while Iraq and Egypt also host 155, 258 and 110,636 refugees respectively.

•         Ireland’s total contribution to the Syrian crisis response will stand at €10.8 million following today’s announcement of €1,000,000. This new funding will be provided to UNHCR (€750,000) and UNICEF (€250,000) for their work to assist Syrian refugees across the region under the Syria Regional Response Plan.

•         To date in 2013, Ireland has also financed eight deployments of members of Ireland's Rapid Response Corps, a roster of skilled and experienced volunteers who make themselves available to deploy at short notice to work in humanitarian emergency situations, to support the relief operations of UN Agencies in Jordan, Lebanon and Egypt.